August 1, 2021 Ridley's Believe It Or Not World Cancer Day

Standing: On a deaths per million population measure on a steady   but slow climb to 1889 the U.S. ranks behind Peru (5867) the new number 1 which has had a quantum leap in deaths previously unmatched which was a change in the classification to give Peru the a new method of reporting to have a fatality rate of 9.31% of total cases now; Hungary the new number 2 has had a huge continuing surge in deaths with the increase now slowing down and improving slightly to  3.86% of its closed cases have died (3117), aping Hungary in terms of increase in deaths Bulgaria (2643),   Brazil (2600) which has been hit with a rapid rise in deaths and cases and passed us and Italy, Columbia newly added to the list  (2346);  Argentina (2316), Belgium (2168), (Italy (2122), Poland (1991), and the UK (1900) which had passed us despite leading world in testing and now has new deaths barely increasing),  and slightly better than Mexico (1848), Chile (1841), Romania (1795), Ecuador newly added to list (1764), ( Spain (1742),  France (1710), Portugal (1709), Bolivia (1505),  Sweden (1438) that never closed its economy down like we did, and Switzerland (1250).
Tests: We have now conducted 529,911,112 tests ( 1,590,854/M) just passed by France at 1,608,077 who is now 1st  on a per capital basis for all nations (other than those nations that contain small populations like Bahrain, Denmark, Israel, Malta, Singapore and UAE) other than the U.K. which remains as king of the mountain with respect to tests at 3,575,667/M.
CV Open Gate: Lost in the pronouncements by Biden and his lackeys  that there is no crisis of illegals surging across the border is that fact that COVID-19 is alive and well and spreading in the Northern Triangle and Mexico which has been passed by Argentina and newly added Columbia to move down to 12th  on my list of deaths from the pandemic  at 1848/M with a fatality rate of 9.84% of closed cases and the 3 countries in the Northern Triangle in terms of active cases and deaths per million are as follows even though the data may be suspect as underreported (regardless of number we need no more cases):
Guatemala:  Active Cases:  34,881 Deaths/M 579
Honduras:    Active Cases: 188,580 Deaths/M 778
El Salvador:  Active cases:     7,714Deaths/M 405
US Vaccinations: As of 8/1/2021 346.5 million doses at .663 million per day (7 months to go for 75% of population vaccinated) and in California 87,539 per day which means if the rate does not increase it will take us now some 4 months to have 75% of the population of California vaccinated which many believe is necessary to develop herd immunity (other than Flip Flop Fauci who may believe that 90% is required).  In California 45,274,227 total doses have been given (88.7% of doses received to exceed the U.S. average of 86.6%), but even with the pressure of a recall to be scheduled this fall which hopefully end Newsom’s term, California has  moved  up from 18th to 17th  of the 50 states in terms of the percentage of doses administered as a percentage of doses delivered to the states and at 53.0% of its population fully vaccinated compared to the U.S. average of 49.6% has moved down from 17th to 19th among the 50 states.  A long way to go still to get herd immunity in terms of getting vaccines received into arms and the percentage of the population fully vaccinated compared to other states which means a great reason to recall this inept and hypocritical governor.
Non  CV News: Mayor Lightfoot tired of being blasted for the crime wave in Chicago is tapping her foot to the beat of the Lollapalooza Music Festival she’s bring to Chicago with its anticipated 100,000 fans in a potential spreader event while announcing she is ready to impose return of CV restrictions; in Texas maybe the deer will be enlisted to fight the swarm of illegals with their bare hooves as two does were caught aping kangaroos and boxing on a Texas homeowner’s surveillance camera: 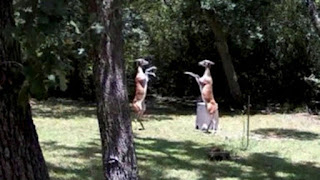 Brian Stelter has left the crashing ratings shelter to compare Trump supporters with cult followers of Jonestown while having Jackie Spear on his show who was shot 5 times and left for dead after landing with Congressman Ryan to investigate what was going on a Jonestown;  Spier who should have the decorum to know better but she chimed in with the same observation (comparing Trump supporters to the mothers that forced their children in Jonestown to drink cyanide laced Kool-Aid to kill them merits the most severe condemnation); the eviction moratorium has expired on Saturday; as might be expected with the U.S. pullout from Afghanistan and the Taliban with their abject brutality surging, some 30,000 Afghans a week are fleeing the country; the Treasury Department has announced it will be releasing 6 years of Trump’s tax returns to Congress (good chance the Blues will pounce on them in a feeding like piranha frenzy to derail any idea Trump has to run in 2024 having already raised $100 million for that possibility);  as CV cases are rising big time across the nation due to the Delta Variant and the CDC is now recommending masks be worn indoors by fully vaccinated people, leave it to the political cartoonist to raise the question graphically are Blue run states following the science or following wokeism? 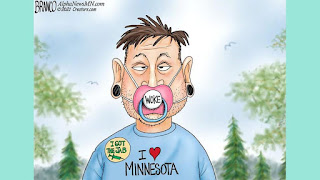 Chicago Gun Violence: Hey Jackass.com is alive and well to collect data to show that through July 31, 2021, gun violence involving mostly persons of color shooting mostly persons of color in Chicago is alive and well with 2574 persons shot of whom 443 have died.
As always, I hope you enjoy today’s holidays and observances, factoids of interest for this day in history, a video recording musical link to “The Hustle” by Van McCoy and the Soul City Symphony, the fact that you rarely if ever experience schadenfreude in dealing with people other areas on the nation are being flooded with scelerats, yours is not; and a quote by JP Faiella on surviving cancer, secure in the knowledge that if you want to send a gift for any memorable events like Labor Day, college graduations, birthdays, weddings, or anniversaries, you know that the Alaskanpoet can provide you with a unique customized poem at a great price tailored to the event and the recipient. Please contact me for details on pricing.
1.  World Lung Cancer Day—created by the International Association for the Study of Lung Cancer for the purpose of studying and eradicating the disease which affects close to 2,000,000 each year and is the leading cancer causing deaths among all the other forms of cancer and sadly is the most preventable by ending smoking which would also end secondhand smoke which is also a killer.
2.  National Minority Donor Awareness Day—created by the International Ranger Federation and first celebrated on this day tin 2007 to honor those park rangers who have lost their lives in the Doctor Clive Calendar on this day in 1996 to create awareness of the need for organ transplants for minority donors as half of the 114,000 persons on a waiting list for organs are minorities.
3. 1975 Number 1 Song USA—the number 1 song in 1975 on this day was “The Hustle” by Van McCoy and the Soul City Symphony   on a run of 1 week in that position to join 34 other songs that achieved number 1 status and join 17 other acts who achieved their first number 1 song on the Billboard Hot 100. Here is a recording of “The Hustle” by Van McCoy and the Soul City Symphony:  https://www.youtube.com/watch?v=WVy3VviSQj0 McCoy was a noted songwriter and musician with some 700 songs to his credit and 10 albums but must have been hustling through life far too quickly and died of a heart attack at age 39 on July 6, 1979.
4.  Word of the Day—the word of the day is “schadenfreude” which means malicious enjoyment over someone’s misfortune which describes the reactions of almost all the “journalists” working at the MSM over Trump’s loss to Biden.

5.  A Day Late and a Rehab Short--celebrating the birth on this day in 1942 of Jerry Garcia, co-founder of, lead vocalist and main songwriter for the Grateful Dead who struggled with obesity, smoking, drugs and alcohol which caught up to him; after belatedly checking in to a rehab facility, he soon thereafter suffered a fatal heart attack on August 9, 1995.

On this day in:
a. 1893 to the joy of breakfast lovers Henry Perky patented shredded wheat.
b. 1943 162 B-24 bombers, after a flight of some 1200 miles over deserts and mountains, attacked the refineries located in Ploesti, Romania in an attempt to deprive Germany of its major oil supply, bombing at 200 to 800 feet off the ground and in the process having 53 planes shot down, 310 airman wounded, some 100 taken prisoner and some 55 planes damaged. Sadly, the sacrifice was for naught as damage was quickly repaired so the refineries were producing higher quantities of petroleum products in two weeks than the amounts being produced prior to the raid.
c. 1971 former Beatle George Harrison and Ravi Shankar organized the Concert for Bangladesh held at Madison Square Garden with a cast of stellar performers who included Ravi Shankar and Ali Akbar Khan who had roots there to raise money to assist the refugees from the Bangladesh-Liberation War genocide. The concert and the live album of the performers there raised over $12 million.

d. 1981 to the delight of music lovers now and in the future, MTV began broadcasting.
e.  2008 an international climbing expedition on K-2 was hit with a series of ice avalanches while climbing K-2, the second highest mountain on Earth starting of Friday, August 1 and ending on August 2 leaving 11 mountaineers dead and 3 injured in the deadliest single incident in climbing K-2.
Reflections on cancer from a cancer survivor: “Before cancer I had this feeling that I was owed a certain level of happiness. After surviving cancer, I realize we’re owed nothing, not even time, so I try to live in a state of appreciation. It’s difficult, but I have to tell you when you’re looking outside the window of a hospital room all the things we get tangled up in mean very little. So, be present and choose to be grateful.” JP Faiella, cancer survivor and CEO of   Image Unlimited Connections

© August 1, 2021 Michael P. Ridley aka The Alaskanpoet
Alaskanpoet for Hire, Poems to Admire
Poet Extraordinaire, Beyond Compare
A Unique Gift, All Recipients a Lasting Gift

Posted by Michael P. Ridley aka the Alaskanpoet at 6:05 PM