August 5, 2021 Ridley's Believe It Or Not National IPA Day

Standing: On a deaths per million population measure on a steady   but slow climb to 1895 the U.S. ranks behind Peru (5876) the new number 1 which has had a quantum leap in deaths previously unmatched which was a change in the classification to give Peru the a new method of reporting to have a fatality rate of 9.31% of total cases now; Hungary the new number 2 has had a huge continuing surge in deaths with the increase now slowing down and improving slightly to  3.86% of its closed cases have died (3117), aping Hungary in terms of increase in deaths Bulgaria (2645),   Brazil (2613) which has been hit with a rapid rise in deaths and cases and passed us and Italy, Columbia newly added to the list  (2364);  Argentina (2338), Belgium (2169), (Italy (2123), Poland (1991), and the UK (1905) which had passed us despite leading world in testing and now has new deaths barely increasing),  and slightly better than Mexico (1860), Chile (1856), Romania (1796), Ecuador newly added to list (1767), (Spain (1752), Portugal (1714), France (1712),, Bolivia (1512),  Sweden (1438) that never closed its economy down like we did, and Switzerland (1251).
Tests: We have now conducted 540,508,495 tests (1,622,566/M) just passed by France at 1,632,860 who is now 1st  on a per capital basis for all nations (other than those nations that contain small populations like Bahrain, Denmark, Israel, Malta, Singapore and UAE) other than the U.K. which remains as king of the mountain with respect to tests at 3,645,704/M.
CV Open Gate: Lost in the pronouncements by Biden and his lackeys  that there is no crisis of illegals surging across the border is that fact that COVID-19 is alive and well and spreading in those illegals crossing the border and in the Northern Triangle and Mexico which has been passed by Argentina and newly added Columbia to move down to 12th  on my list of deaths from the pandemic  at 1860/M with a fatality rate of 9.65% of closed cases and the 3 countries in the Northern Triangle in terms of active cases and deaths per million are as follows even though the data may be suspect as underreported (regardless of number we need no more cases):
Guatemala:  Active Cases:  36,978 Deaths/M 579
Honduras:    Active Cases: 192,989 Deaths/M 795
El Salvador:  Active cases:     8,156 Deaths/M 410
US Vaccinations: As of 8/5/2021 349. million doses at up from .677 million per day to .699 per day (down to 6 months to go for 75% of population vaccinated) and in California 91,034 per day (90,681 yesterday) which means if the rate does not increase it will take us still some 4 months to have 75% of the population of California vaccinated which many believe is necessary to develop herd immunity (other than Flip Flop Fauci who may believe that 90% is required).  In California 45,571,605 total doses have been given (88.8% of doses received to exceed the U.S. average of 86.7%), but even with the pressure of a recall to be scheduled this fall which hopefully end Newsom’s term, California has  not moved from 17th tied now with Illinois  of the 50 states in terms of the percentage of doses administered as a percentage of doses delivered to the states and at 53.3% of its population fully vaccinated compared to the U.S. average of 49.9% has moved down from 16th to 17th among the 50 states.  A long way to go still to get herd immunity in terms of getting vaccines received into arms and the percentage of the population fully vaccinated compared to other states which means a great reason to recall this inept and hypocritical governor.
Non  CV News: Biden may prove once again that political promises are like American treaties made with Native Americans—meant to be broken when it comes to his pledge of no increases in taxes for Americans earning less than $400,000  as an increase in the federal gas tax may be required after the Congressional Budget Office projected the “bipartisan” infrastructure bill will result in a $456 billion addition to the federal deficit (a pilot program of taxing based on miles driven is included in the bill); the sex scandal of Andrew Cuomo and the role of Chris Cuomo in advising him and refusing to cover in the slightest mention it has created 3 new anchor monkeys at CNN of see no evil, hear no evil and speak no evil--Alisyn Camerota, Brianna Keilar, Kate Bolduan    (such blatant bias and hyprocisy as their level of on air outrage would be off the charts if this reptilian brain Cuomo were a Red as opposed to a Blue); as more and more parents are rising up in rage over CRT being shoved down their children’s throats and Red controlled states are seeking to ban the teaching of CRT in public schools the teachers unions which have shown during the pandemic fighting to reopen the schools are no friends of schoolchildren, the National Education Association Rhode Island  has filed for a TRO and permanent injunction to prevent a FOIA request on CRT at  filed by a mother of two in elementary school in South Kingston, Rhode Island, Nicole Solas from being complied with; Fauci is sounding the alarm that the rapidly spreading Delta variant may mutate further and become more lethal which if true would really call for a massive uptick in the below 700,000 a day vaccinations occurring now but sad his credibility over the COVID-19 Wuhan Lab origin and his funding of research there has been torched; Biden’s transparency is of the deeply leaded glass variety as one of his key advisers who is a special employee Anita Dunn, co-founder of SKDK, a political consulting firm with many clients heavily interested in the Biden agenda, is set to return to SKDK without revealing any of her financial information required by law; as crime surges and polls show Americans opposing the inane “Defund the Police” movement, leave it to the political cartoonist to display the ability to shift gears to change a position that will be a sure looser: 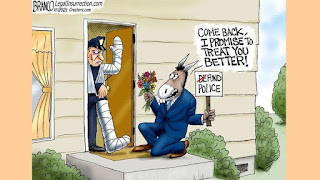 Chicago Gun Violence: Hey Jackass.com is alive and well to collect data to show that through August 3, 2021, gun violence involving mostly persons of color shooting mostly persons of color in Chicago is alive and well with 2625 persons shot of whom 451 have died.
As always, I hope you enjoy today’s holidays and observances, factoids of interest for this day in history, a  video musical link to “Bad Girls” by Donna Summer, the fact that you do not have sciaphobia; and a quote by Alan Greenspan on President Reagan’s firing of the air traffic controllers, secure in the knowledge that if you want to send a gift for any memorable events like Labor Day, college graduations, birthdays, weddings, or anniversaries, you know that the Alaskanpoet can provide you with a unique customized poem at a great price tailored to the event and the recipient. Please contact me for details on pricing.
1.  National IPA Day—created by Asheley Rouston and Ryan Ross and celebrated on the first Thursday starting in 2011 to commemorate the production IPA which first made its scene due to its high hop content to be able to sail to India from Great Britain as the humidity and high temperatures there made brewing a challenge.
2.  National Oysters Day—celebrating that delicious mollusk bivalve that has been farmed since Roman times and the species not found on your dinner plate generate pearls for jewelry.
3. 1979 Number 1 Song USA—the number 1 song in 1979 on this day was “Bad Girls” by Donna Summer on a run of 5 weeks in that position to join 23 other songs that achieved number 1 status as 10 acts achieved their first number 1 song on the Billboard Hot 100. Here is a video  recording of “Bad Girls” by Donna Summer:  https://www.youtube.com/watch?v=HzxW4eu9heY This talented singer died too soon from lung cancer on May 17, 2012 at the age of 63; she had smoked in her youth but was exposed to second hand smoke in her club performances for many years and may have had a disposition for the disease in her family.
4.  Word of the Day—the word of the day is “sciaphobia” which means a fear of shadows which may be a healthy fear given the surge of crime in our Blue run urban areas.

5.  It’s All in the Name—celebrating the birth on this day in 1911 of Spangler Arlington Brugh, noted prolific movie and television actor best known to his fans as Robert Taylor who was a three pack a day smoker from boyhood and who had the unpleasant surprise after surgery to remove a portion of his right lung due to suspected “valley fever” of having the doctors discover lung cancer which killed him on June 8, 1969.

On this day in:
a. 1962 actress Marilyn Monroe was found dead in the morning from an overdose of barbiturates.
b. 1974 in a move certain to bring about the fall of the existing government of South Vietnam, Congress imposed a $1 billion limit on all aid to South Vietnam which fell to the advancing armies of North Vietnam on April 30, 1975.
c. 1981 President Ronald Reagan fired 11,359 air traffic controllers who were striking illegally and refused to return to work as ordered; their union was decertified and strikers were banned for life from employment with the federal government and the government was able to initially restore 50% of the flights cancelled due to absence of flight controllers.
d. 2012 Wade Michael Page, a 40 year old former Army vet and white supremacist, entered a Sikh Temple in Oak Creek, Wisconsin armed with a semi-automatic pistol and shot and killed 6 worshippers and wounding 4, 1 of whom later died, and then as police arrived killed himself with a shot to his head.
e. 2015 in an example of complete ineptitude the EPA caused a spill of waste water from the    Gold King Mine, releasing 3 million gallons of toxic metal tailings into the Animas River in Colorado.
Reflections on the firing of the air traffic controllers by President Reagan: “Perhaps the most important, and then highly controversial, domestic initiative was the firing of the air traffic controllers in August 1981. The President invoked the law that striking government employees forfeit their jobs, an action that unsettled those who cynically believed no President would ever uphold that law. President Reagan prevailed, but far more importantly his action gave weight to the legal right of private employers, previously not fully exercised, to use their own discretion to both hire and discharge workers. " Alan Greenspan, former Federal Reserve Chairman

© August 5, 2021 Michael P. Ridley aka The Alaskanpoet
Alaskanpoet for Hire, Poems to Admire
Poet Extraordinaire, Beyond Compare
A Unique Gift, All Recipients a Lasting Gift

Posted by Michael P. Ridley aka the Alaskanpoet at 12:26 PM