August 6, 2021 Ridley's Believe It Or Not Hiroshima Peace Memorial Ceremony

Standing: On a deaths per million population measure on a steady   but slow climb to 1899 the U.S. ranks behind Peru (5878) the new number 1 which has had a quantum leap in deaths previously unmatched which was a change in the classification to give Peru the a new method of reporting to have a fatality rate of 9.31% of total cases now; Hungary the new number 2 has had a huge continuing surge in deaths with the increase now slowing down and improving slightly to  3.86% of its closed cases have died (3118), aping Hungary in terms of increase in deaths Bulgaria (2649),   Brazil (2623) which has been hit with a rapid rise in deaths and cases and passed us and Italy, Columbia newly added to the list  (2372),  Argentina (2349), Belgium (2170), Italy (2124), Poland (1992), and the UK (1907) which had passed us despite leading world in testing and now has new deaths barely increasing),  and slightly better than Mexico (1869), Chile (1859), Romania (1796), Ecuador newly added to list (1772), Spain (1753), Portugal (1716), France (1714), Bolivia (1514),  Sweden (1438) that never closed its economy down like we did, and Switzerland (1251).
Tests: We have now conducted 542,891,847 tests (1,629,669/M) just passed by France at 1,651,4950 who is now 1st  on a per capital basis for all nations (other than those nations that contain small populations like Bahrain, Denmark, Israel, Malta, Singapore and UAE) other than the U.K. which remains as king of the mountain with respect to tests at 3,658,575/M.
CV Open Gate: Lost in the pronouncements by Biden and his lackeys  that there is no crisis of illegals surging across the border is that fact that COVID-19 is alive and well and spreading in the Northern Triangle and Mexico which has been passed by Argentina and newly added Columbia to move down to 12th  on my list of deaths from the pandemic  at 1869/M with a fatality rate of 9.63% of closed cases and the 3 countries in the Northern Triangle in terms of active cases and deaths per million are as follows even though the data may be suspect as underreported (regardless of number we need no more cases):

US Vaccinations: As of 8/6/2021 349.8 million doses at up from .699 million per day to .694 million per day (down to 6 months to go for 75% of population vaccinated) and in California 90,321 per day (91,034 yesterday) which means if the rate does not increase it will take us still some 4 months to have 75% of the population of California vaccinated which many believe is necessary to develop herd immunity (other than Flip Flop Fauci who may believe that 90% is required).  In California 45,677,059 total doses have been given (88.8% of doses received to exceed the U.S. average of 86.5%), but even with the pressure of a recall to be scheduled this fall which hopefully end Newsom’s term, California has  moved up from 17th tied now with Illinois to 16th  of the 50 states in terms of the percentage of doses administered as a percentage of doses delivered to the states and at 53.4% of its population fully vaccinated compared to the U.S. average of 50.0% has moved up from 17th to 16th  among the 50 states.  A long way to go still to get herd immunity in terms of getting vaccines received into arms and the percentage of the population fully vaccinated compared to other states which means a great reason to recall this inept and hypocritical governor.
Non  CV News: Chilling reminder video of the rampant deadly crime surge as a surveillance camera captured a dark skinned woman pulling out a pistol in broad daylight and executing 42 year old Delia Johnson while she was conversing with a group of people in New York City after Ms. Johnson had attended a funeral; maligned Chris Cuomo is going on a supposedly long planned vacation and a one hour special on AOC, that icon of objectivity and tolerance (real question should be whether the vacation will morph into a termination or demotion off his anchor status); if any of the 11 sexual harassment victims sue Cuomo the state of New York will be liable for any judgment as his harassment occurred in the course of his employment and on state property (the gift that keeps on giving Andrew); New York has a law requiring all state employees to undergo an annual training session on sexual harassment but attestation form that indicates the person has had such training in Cuomo’s case was signed by his aide not him which raises the logical question did he obtain such training (safe bet most likely given the fact he seems clueless as to what is or is not sexual harassment is not a chance the training was received); 2 off duty Seattle police officers who were in Washington during the January 6, 2021 demonstration have been fired although they claimed they had left before the storming of the Capitol occurred; lobbyists for the real estate industry spent some $100 million to unsuccessfully prevent the termination of the eviction ban which has been replaced with a ban that will expire on October 31 (with the jobless rate now down to 5.1% and employers begging for workers it would be a rare person not able to find a job to start paying rent so the non-corporate landlords who provide a really large proportion of the rental property in this nation can start receiving rent so they are not being bled to death financially with mortgage costs); the snit fit between Biden and De Santis continues but with De Santis getting the last laugh and goring Biding big time with his retort—What else has he forgotten? (since the answer is almost everything due to dementia has been forgotten, the better retort would have been what if anything can he still remember?); as the government considers a vaccine mandate and more and more private companies are considering vaccination as a condition of employment, leave it do the political cartoonist to graphically portray the loss of our liberties: 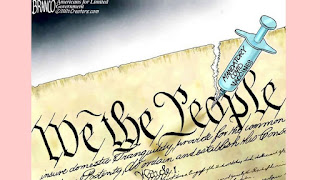 Chicago Gun Violence: Hey Jackass.com is alive and well to collect data to show that through August 5, 2021, gun violence involving mostly persons of color shooting mostly persons of color in Chicago is alive and well with 2660 persons shot of whom 455 have died.
As always, I hope you enjoy today’s holidays and observances, factoids of interest for this day in history, a  video musical link to “Magic” by Olivia Newton John, the fact that you do not have sciapodous; and a quote by Albert J. Beveridge on the beliefs of the Bull Moose Party, secure in the knowledge that if you want to send a gift for any memorable events like Labor Day, college graduations, birthdays, weddings, or anniversaries, you know that the Alaskanpoet can provide you with a unique customized poem at a great price tailored to the event and the recipient. Please contact me for details on pricing.
1.  Hiroshima Peace Memorial Ceremony—commemorating the dropping of the atomic bomb on Hiroshima on this day in 1945 and held every year since 1947 and a grim reminder of the total folly a nuclear war would entail in terms of death and destruction and adverse climatic changes caused by a nuclear winter arising from such exchange.                        2.  International Beer Day—created by Jesse Avshalomov in 2007 and celebrated on the first Friday in August since 2013 to celebrate the beers made in all nations and cultures   as a link to a beverage what was first brewed in Sumeria some 6000 years ago.
3. 1980 Number 1 Song USA—the number 1 song in 1980 on this day was “Magic” by Olivia Newton John on a run of 4 weeks in that position to join 16 other songs one of which was by John Lennon which was achieved by him posthumously as the 4th artist to achieve that distinction, that achieved number 1 status as 6 acts achieved their first number 1 song on the Billboard Hot 100. Here is a recording of “Magic” by Olivia Newton John: https://www.youtube.com/watch?v=sDmjEN-6ekE  This talented singer has been waging a long fight against breast cancer but is still with us.
4.  Word of the Day—the word of the day is “sciapodous” which means having large feet which with a size 17 shoe describes Shaq O’Neill to a tee.

5.  I5 Minutes of Fame Trumped by Art That Lives a Lifetime--celebrating the birth on this day in 1928 of noted pop artist Andy Warhol who achieved fame and fortune with paintings like a Campbell’s Soup Can but his 15 minutes of fame ran out on February 22, 1987 when he died in his sleep of an irregular heart beat while recovering from gall bladder surgery.
On this day in:
a. 1912 The Bull Moose Party met in the Chicago Coliseum to nominate Teddy Roosevelt to run for president of the United States to receive more votes that the Republican nominee Taft but to lose to Woodrow Wilson.
b. 1926 in a closing the curtain on silent films, Warner Brothers released the movie Don Juan starring John Barrymore in the Vitaphone format.
c. 1960 Fidel Castro nationalized all U.S. and foreign owned property in Cuba following his overthrow of Cuba Dictator Batista.
d. 1991 Tim Berners-Lee published his ideas for a World Wide Web and WWW made its appearance on the internet and the internet age is on.
e. 2011 a U.S. Army Chinook helicopter with 38 Seals and other soldiers and one war dog was shot down by a RPG in combat operations in Afghanistan, killing all aboard for the largest single day fatalities during our long war in Afghanistan.
Reflections on the platform of the Bull Moose Party: “We stand for a nobler America; we stand for a broader liberty, a fuller justice; we stand for intelligent co-operation instead of reckless competition; we stand for mutual helpfulness instead of mutual hatred; we stand for equal rights as a fact of life instead of a catch-word of politics; we stand for the rule of the people as a practical truth instead of a meaningless pretense.” Albert J. Beveridge

© August 5, 2021 Michael P. Ridley aka The Alaskanpoet
Alaskanpoet for Hire, Poems to Admire
Poet Extraordinaire, Beyond Compare
A Unique Gift, All Recipients a Lasting Gift

Posted by Michael P. Ridley aka the Alaskanpoet at 12:01 PM