A presidency or his legacy is often defined in optics that forever in our memories last
Lyndon B. Johnson after Tet addressing the nation telling us no reelection votes for him can be cast
Richard Nixon on the effective day of his resignation climbing steps up Marine 1 in disgrace
Turning with his arms outstretched with fingers in V’s to his supporters face
For Jimmy Carter images of our Embassy in Tehran being overrun
Followed months later by a deadly failed rescue attempt that drove voters to his presidency shun
For Bill Clinton his TV pronouncement that with Monica Lewinsky sexual relations he denied
As the revelations of the Blue Dress came out back on TV to admit he had lied
For Barack Obama the passage of his Obamacare
With scenes of the rollout in front of Sibelius of the systems crashing live on air
For Donald Trump the images fused together in a daily 24/7 discrediting opposition attempt
Ending with the January 6 assault on the Capitol which greeted a second failed impeachment and scathing MSM contempt
For Biden the images have been coming fast and furious of mental acuity in rapid fade
And a growing flood in the thousands of illegal aliens to our safety and prosperity degrade
And finally what could be the coup de grâce images of Afghans clinging to departing planes
A cut and run withdrawal lack of planning for which verged on the insane
Topped finally on Thursday with suicide bombings at the airport by  ISIS-k who Taliban checkpoints escaped
13 American servicemen lost their lives and 18 wounded along with 90 dead Afghans packed at an entrance gate
The political cartoonist shows our flag at half-mast
Honor our dead and perhaps a Biden Presidency that can no longer last.
And the camera at a press conference shows Biden’s head in his hands
Doubtful this deadly failing can his presidency withstand
© August 27, 2021 The Alaskanpoet 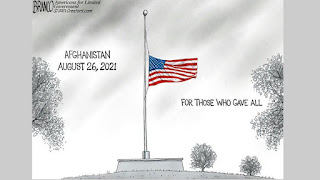 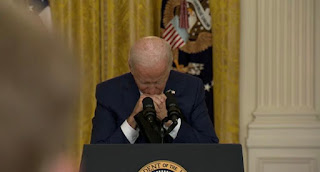 Posted by Michael P. Ridley aka the Alaskanpoet at 2:16 PM