August 7, 2021 Ridley's Believe It Or Not Taxpayer Appreciation Day

Standing: On a deaths per million population measure on a steady   but slow climb to 1900 the U.S. ranks behind Peru (5880) the new number 1 which has had a quantum leap in deaths previously unmatched which was a change in the classification to give Peru the a new method of reporting to have a fatality rate of 9.31% of total cases now; Hungary the new number 2 has had a huge continuing surge in deaths with the increase now slowing down and improving slightly to  3.86% of its closed cases have died (3118), aping Hungary in terms of increase in deaths Bulgaria (2649),   Brazil (2623) which has been hit with a rapid rise in deaths and cases and passed us and Italy, Columbia newly added to the list  (2372),  Argentina (2349), Belgium (2170), Italy (2124), Poland (1992), and the UK (1908) which had passed us despite leading world in testing and now has new deaths barely increasing),  and slightly better than Mexico (1869), Chile (1863), Romania (1797), Ecuador newly added to list (1772), Spain (1753), Portugal (1718), France (1715), Bolivia (1516),  Sweden (1438) that never closed its economy down like we did, and Switzerland (1251).
Tests: We have now conducted 543,573,390 tests (1,631,715/M) just passed by France at 1,651,495 who is now 1st  on a per capital basis for all nations (other than those nations that contain small populations like Bahrain, Denmark, Israel, Malta, Singapore and UAE) other than the U.K. which remains as king of the mountain with respect to tests at 3,658,575/M.
CV Open Gate: Lost in the pronouncements by Biden and his lackeys  that there is no crisis of illegals surging across the border is that fact that COVID-19 is alive and well and spreading in the Northern Triangle and Mexico which has been passed by Argentina and newly added Columbia to move down to 12th  on my list of deaths from the pandemic  at 1869/M with a fatality rate of 9.59% of closed cases and the 3 countries in the Northern Triangle in terms of active cases and deaths per million are as follows even though the data may be suspect as underreported (regardless of number we need no more cases):

Guatemala:  Active Cases:  39,709 Deaths/M 586
Honduras:    Active Cases: 194,706 Deaths/M 806
El Salvador:  Active cases:     8,728 Deaths/M 413
US Vaccinations: As of 8/7/2021 350.6 million doses,  up from .694 million per day to .712 million per day (down to 6 months to go for 75% of population vaccinated) and in California 90,333 per day (90,321 yesterday) which means if the rate does not increase it will take us still some 4 months to have 75% of the population of California vaccinated which many believe is necessary to develop herd immunity (other than Flip Flop Fauci who may believe that 90% is required).  In California 45,772,034 total doses have been given (88.7% of doses received to exceed the U.S. average of 86.2%), but even with the pressure of a recall to be scheduled this fall which hopefully end Newsom’s term, California has not moved from 16th  of the 50 states in terms of the percentage of doses administered as a percentage of doses delivered to the states and at 53.5% of its population fully vaccinated compared to the U.S. average of 50.1% has moved down from 16th to 17th  among the 50 states.  A long way to go still to get herd immunity in terms of getting vaccines received into arms and the percentage of the population fully vaccinated compared to other states which means a great reason to recall this inept and hypocritical governor.
Non  CV News: The border crisis is increasing exponentially with infected aliens increasingly being add to the mix and being released if we are lucky with court dates and promises to appear; appalling photos of tents crammed above capacity on floors waiting to be processed and released; Mayorkas who had the insanity to claim there is no crisis is facing calls for his impeachment (not a chance in hell unless some of the Blue border state reps join in but real chance if Blues are swept from power in 2022); the reptilian brain is alive and well in the Blues (sadly also in the Reds) as “rising star” in the Arizona Democratic Party Arizona State Representative Tony Navarrete has been arrested for sexually abusing a male minor and to their credit the Arizona Democratic Party quickly demanded he resign; Elise Stefanik who is pregnant and expecting her child this fall has slammed a news broadcast questioning her ability to perform her duties during her maternity leave as being blatantly sexist; life is good for Barack Obama as guests descend on his Martha’s Vineyard property for a gala birthday being celebrated by the high and mighty elite with a bow to the Green New Deal of a meatless menu; thousands of Parisians are taking to the streets to protest starting Monday that the French will need a vaccine passport to enter many public places (wonder when we get hit with the same requirement that in a silver lining will gut the opposition to requiring voter ID since if you need a passport to enter a theater or restaurant hard to argue that voter ID is not need to enter a polling place; an explanation why Cuomo will not resign is a simple one—his home is the Albany Governor’s Mansion which he would have to vacate and he owns no real property at the present time (but if prosecuted and convicted on the criminal complaint just filed this pervert will have a nice prison cell with 3 meals a day); Hogs rule and whiners drool as some 700,000 visitors are expected to descend on Sturgis, South Dakota during the next 10 days thumbing their noses as the threat of spreading COVID-19; the Dixie Fire in California has risen to over 500 square miles and still burning and has just torched the historic mining town of Greenville; the USA Women’s basketball team was its 7 Olympic Gold Medal in a row against Japan 90-75 and 2 of its players, Diana Taurasi and Sue Bird, may have played their last Olympic game after each picking up their 5th team Gold Medal; as De Blasio is trying to introduce in NYC a vaccine passport to enter many public locations, leave it to the political cartoonist to graphically portray the invasion of the worms of rot in the former Big Apple: 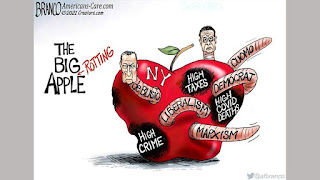 Chicago Gun Violence: Hey Jackass.com is alive and well to collect data to show that through August 6, 2021, gun violence involving mostly persons of color shooting mostly persons of color in Chicago is alive and well with 2681persons shot of whom 460 have died.
As always, I hope you enjoy today’s holidays and observances, factoids of interest for this day in history, a  video musical link to “Jessie’s Girl” by Rick Springfield, the fact that you are able to detect sciolism in a very short time; and a quote by Niall Ferguson on the effects of banning drugs like thalidomide, secure in the knowledge that if you want to send a gift for any memorable events like Labor Day, college graduations, birthdays, weddings, or anniversaries, you know that the Alaskanpoet can provide you with a unique customized poem at a great price tailored to the event and the recipient. Please contact me for details on pricing.
1.  Taxpayer Appreciation Day—proposed by Ralph Nader in 1999 to honor the contributions made to this economy and culture by the efforts of taxpayers funding a variety of necessary and needed governmental expenditures.
2.  Purple Heart Day—created by the Purple Heart Foundation in 2014 to commemorate the award of the Purple Heart for any member of the U.S. Armed Forces who has died or been wounded in battle or by friendly forces.
3.  1981 Number 1 Song USA—the number 1 song in 1981 on this day was “Jessie’s Girl” by Rick Springfield on a run of 2 weeks in that position to join 16 other songs that achieved number 1 status and join 9 other acts that achieved their first number 1 song on the Billboard Hot 100. Here is a recording of “Jessie’s Girl” by Rick Springfield: https://www.youtube.com/watch?v=qYkbTyHXwbs  This Australian born singer has struggled with depression, had a two year relationship with Linda Blair when she was really young and is now one of us becoming an American citizen in March of 2006.
4.  Word of the Day—the word of the day is “scioloism” which means superficial pretentions of knowledge which describes to a tee when noted actors with parts that make them appear to be brilliant then pontificate as if they were the geniuses that they portrayed in their script.
5.  Hard to Bridge the Gap--celebrating the birth on this day in 1927 of Carl Switzer noted child actor best known for his role as “Alfalfa” in Our Gang but struggled to find adult roles as he aged and ended up being a dog trainer and breeder and ended up by shot and killed over money owed to him on January 21, 1959.
On this day in:
a. 1944 IBM introduced the first program-controlled calculator the Automated Sequence Controlled Calculator best known as the Harvard Mark I.
b. 1962 pharmacologist Frances Oldham Kelsey, a reviewer with the FDA, was awarded the U.S. President’s Award for Distinguished Civil Service for her refusal to authorize the sale and use of the drug thalidomide which was later shown to cause severe birth defects in some 10,000 babies born in Europe during its use as a medication to treat morning sickness.
c. 1978 as a result of decades of dumping of toxic chemicals, President Jimmy Carter declared a federal emergency at Love Canal a neighborhood of Niagara Falls, New York which was designated a Superfund site that took 21 years to clean up.
d. 1987 open water long distance swimmer Lynne Cox with the permission of the Soviet Union became the first person to swim between the United States and the Soviet Union leaving Little Diomede in Alaska and swimming 2.3 miles to Big Diomede in the Soviet Union in waters with a temperature of 43º F.
e. 2007 at AT&T Park in San Francisco, Barry Bonds, Jr. hit his 756th home run to surpass Hank Aaron’s record set 33 years earlier; he would finish his career with 762 home runs.
Reflections on the banning of thalidomide: “The rationale for the FDA's rigid standards is to avoid the sale of a drug like thalidomide. But the unintended consequence is almost certainly to allow many more people to die prematurely than would have died from side-effects under a less restrictive regime. We count and recount the costs of such side-effects. We do not count the costs of not allowing new drugs to be made available.” Niall Ferguson, Senior Fellow at the Hoover Institution

© August 7, 2021 Michael P. Ridley aka The Alaskanpoet
Alaskanpoet for Hire, Poems to Admire
Poet Extraordinaire, Beyond Compare
A Unique Gift, All Recipients a Lasting Gift

Posted by Michael P. Ridley aka the Alaskanpoet at 12:07 PM