February 18, 2022 Ridley's Believe If Or Not National Drink Wine Day

CV World Cases: The planet continues on an increasing basis with cases now over 421 million at 421,935,764 cases,  69,695,843 of which are active, 352,239,931  closed with 346,348,135 recoveries (98.33%), and nearing the 5,900,000 barrier 5,891,876 deaths (1.67% )to continue the low trend of increased cases with increased recovery percentages and decreased death percentages with some plateaus, dips, and rises.
CV USA Cases: Total cases now passing 80 million at 80,01621with 27,677,644 active cases  of which 12,562  are serious or critical, (15,517 on 12/12) (back to steady decreases despite the increase in active cases due to the relative mildness of the Omicron variant) to .045 % of active cases (back to back steady decreases despite the increase in active cases due to the relative mildness of the Omicron variant  and to increase  the reduction from the 29,271 peak on 12/31/2020 to 16,709, 52,349,047 closures with 958,152 deaths (1.83%) and with 51,390,895 recoveries (98.17%). Our death rate percentage is .16%  higher than the world’s death rate.
Standing: On a deaths per million population measure on a steady but slow climb to 2867 the U.S. ranks behind Peru (6197) the new number 1 which has had a quantum leap in deaths previously unmatched which was a change in the classification to give Peru the a new method of reporting; Bulgaria (5096), Hungary (4477), Romania (3275),  Brazil (2991), and Poland (2899) and slightly higher than Argentina (2726), Columbia (2663), Belgium (2561), Italy (2530), Mexico (2399), Russia (2355), UK (2342), Chile (2119), Spain (2095), France (2083), Portugal (2046), Ecuador (1942),  Bolivia (1790),  Sweden (1640) that never closed its economy down like we did, and Switzerland (1498).
US Vaccinations: As of 02/18/22   549.5 million doses, 646,802 per day last week ( 75.4%) of population now vaccinated  with at least one shot)  and in California 94,293 per day  (which means at least 81.4% of the population of California has received at least one shot) which many believe is necessary to develop herd immunity (other than Flip Flop Fauci who may believe that 90% is required).  In California 70,952,253 total doses have been given (83.1%  of doses received to exceed the U.S. average of 81.2%), California has  moved  from 14th to 14th tied with Nevada of the 50 states in terms of the percentage of doses administered as a percentage of doses delivered to the states and at 70.0%% of its population fully vaccinated compared to the U.S. average of 64.0% and has  moved from  to 11th tied with Washington 12th   in terms of the percentage of the population fully vaccinated compared to other states (nothing like a recall election to get Newsom’s attention and performance).
Non  CV News:  Russian invasion of Ukraine appears more and more likely as the President of Ukraine has left the country to join Harris in a security conference of NATO in Munich (ironic as it was the site of the 1938 Munich meeting which resulted in the Sudetenland being appeased to Germany and remember what happened to our highly trained and armed Afghan Army when its president left the country—folded quickly like a house of cards); in the Ivy League swimming championships Lynn Thomas, a transgender who used to compete as a male, is making a mockery of women’s sports (unless this nonsense of allowing transgenders to compete as females is ended, kiss women’s sports and Title IX goodbye); Trudeau the Basement Tyrant is cracking down and arresting Freedom Convoy truckers and incurring the wrath of Canadian clergy; looks like my name of Cack News Network for CNN is being replaced to Corrupt News Network by the actions of resigned Allison Gollust as while working there she was sending notes to producers of interviews of areas disgraced governor Andrew Cuomo wanted to discuss; as illegals and illegal drugs surge across the border in massive numbers in January which is historically a low month, AOC continues to make a fool of herself, this time selling “Abolish ICE” clothing and other items on her online store; Karine-Jean Pierre, one of the Bobbsey Twins with Jen Psaki of the Presidential Press Secretary Corps made a fool or herself claiming Governor Noem’s signing of a bill in South Dakota prohibiting transgenders from competing in women’s sports was attacking the LBGT youth in her state; Kim Potter was sentenced by Judge Chu to 2 years in prison for her accidental shooting of Daunte Wright which provoked some looting in Brooklyn Heights and the march of 100 some protestors to the home of Judge Chu; George Gascon fighting a second recall effort for his soft on criminals has become the buzzword target by Orange County DA Todd Spitzer running for reelection as D.A. who charged his opponent criminal defense attorney Pete Hardin as being another George Gascon with similar views; Eric Adams with his tossing the race card at journalists is looking more like Lori “Lightweight” Lightfoot and with respect to subway safety having cops patrolling with nurse and health care workers more like a defund the police wolf in sheep’s clothing; Amy Entelis, one of the troika appointed on an interim basis to manage troubled CNN, is no stranger to toxic environments having been an executive at ABC News, infamous for its toxic work environment; while Biden and his Blues may be oblivious to the ravages of inflation, ordinary Americans are not as Burger King is raising prices and dropping its iconic Whopper from its discount menu; Trudeau is being attacked for his tyranny but leave it to the political cartoonist to portray the roots of this man’s tyranny: 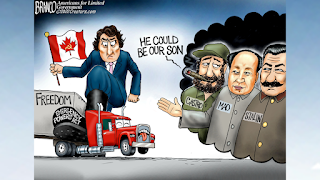 Chicago Gun Violence: Hey Jackass.com is alive and well to collect data to show that through February 17, 2022, gun violence involving mostly persons of color shooting mostly persons of color in Chicago is alive and well with 331 shot of whom 75 have died while 2021 shootings numbers compared to 2020 are 4544 to 4248 and deaths are 846 compared to 797.
As always, I hope you enjoy today’s holidays and observances, factoids of interest for this day in history, a recording link to “Duke of Earl” by Gene Chandler, the fact that you detest people who engage in sollevation, and a quote by Bonnie Hanssen on her lack of knowledge of her husband’s spying, secure in the knowledge that if you want to send a gift for any memorable events like Valentine’s Day or St. Patrick’s Day, college graduations, birthdays, weddings, or anniversaries, you know that the Alaskanpoet can provide you with a unique customized poem at a great price tailored to the event and the recipient. Please contact me for details on pricing.
1.   National Drink Wine  Day—not sure who or when created this day or why this day was chosen to celebrate and “spread the love and health benefits of wine” when of course consumed in moderation. This beverage has been part of our diet and culture since 6000 B.C.
2.  National Woman’s Heart Day—created by Sister to Sister: Everyone Has a Heart Foundation and celebrated on the third Friday in February since 2001 to promote awareness of heart disease which is the leading cause of death among women and steps to be taken to insure a healthy heart.
3.  1962  Number 1 Song—the number 1 song in 1962  on this day was  “Duke of Earl” by Gene Chandler on a run of 3 weeks in that position to join 20 other songs that achieved number 1 status and 13 other acts that achieved their first number one song. Here’s a recording of Gene Chandler  performing “Duke of Earl”: https://www.youtube.com/watch?v=h6Uht69h8Is   Chandler an African American singer known rightfully given the hit song as “The Duke” was one of the few artists to chart success spanning rhythm and blues, doo-wop, soul, and disco. He has retired and will celebrate his 85th birthday this year on July 6.
4.  Word of the Day—the word of the day is “sollevation” which means insurrection which is what Blues and some of the MSM who should know better are trying to characterize the events of January 6, 2021.
5.  Stage Fright Won’t Kill You But Treating May—celebrating the birth on this day in 1940 of noted Italian guitarist, singer and songwriter Fabrizio De André who recorded 14 albums and sold over 65 million records but who was shy and  had terrible stage frights that caused him to drink a liter of whiskey performing until the mid-80’s after a doctor told him his cure would damage his liver and kill him, causing him to become a chain smoker which led to lung cancer which killed him on January 11, 1999.
On this day in:
a. 1972 the California Supreme Court in the case of People v. Anderson ruled that California’s death sentence was unconstitutional and commuted all prisoners’ sentences to death to life imprisonment there by saving the life of Charles Manson who despite many parole attempts died in prison on November 19, 2017 at the age of 83.
b. 1979 Richard Petty won his then record 6th Daytona 500 following a crash on the final lap by leaders Donnie Allison and Cale Yarborough in the first NASCAR race with flag to flag TV coverage.
c. 2001 after spying for the Soviet Union since 1979 FBI agent Robert Hanssen was arrested and after pleading guilty he was sentenced to 15 consecutive life sentences without possibility of parole and is rotting away at age 77 in ADX Florence, a federal supermax prison spending 23 hours a day in solitary confinement and leaving a wife and 6 children to bear the  stigma of a spy for husband and father.
d. 2001 7 time NASCAR Champion Dale Earnhardt on the final lap of the Daytona 500 was killed in a 3 car collision. His son Dale Earnhardt, Jr. finished second in the race.
e. 2010 WikiLeaks  published 750,000 classified and unclassified documents containing sensitive military and diplomatic material by a U.S. soldier Bradley Manning who is now a transgender known as Chelsea Manning who in 2010 was arrested, imprisoned while awaiting trial at which she was convicted on July 13, 2013 and sentenced to 35 years but was fortunate enough to have her sentence commuted to time served on January 17, 2017 by President Obama.
Spies lie especially to a spouse: “But he told me he was just tricking the Russians and feeding them false information. He never said he was spying. I told him I thought it was insane.'' Bonnie Hanssen in a polygraph examination to establish she knew nothing of her husband’s spying career.
Please enjoy the poems on events of interest on my twitter account below (if you like them, retweet, and follow me) and follow my blogs. Always good, incisive and entertaining poems on my blogs—click on the links below. Go to www.alaskanpoet.blogspot.com for Ridley’s Believe It Or Not—This Day in History,  poems to inspire, touch, emote, elate and enjoy and poems on breaking news items of importance or go to  Ridley's Believe It Or Not for just This Day in History.

© February 18, 2022,  Michael P. Ridley aka The Alaskanpoet
Alaskanpoet for Hire, Poems to Admire
Poet Extraordinaire, Beyond Compare
A Unique Gift, All Recipients Receive a Lasting Lift


Posted by Michael P. Ridley aka the Alaskanpoet at 3:49 AM