In World War II when Moscow was threatened by approaching German tanks
We witnessed thousands of civilians with picks and shovels in steady ranks
Digging tank ditches to hinder and halt Guderian’s armored attacks
Which along with Russian Siberian troops help stop the Wehrmacht in its tracks
The same scene was repeated on the outskirts of Berlin
But too late to hinder or halt the Soviets bloody Berlin Battle Win
The photos coming out of Ukraine as Russian invasion with certainty nears
Should cause its tank commanders to laugh and create no fear
Photos of citizens training and being armed to fight the Russian horde
But an examination reveals that many of the AK-47’s are made of boards
Unable to fire and piss poor as suicidal clubs
No tank ditches to the speed of the tanks’ advance drub
The longer it takes the Russians to Ukraine subdue
The more their body bag count grew
With the home front like in Afghanistan demanding they withdrew
Sadly leaving the Ukrainians having paid their costly and bloody dues
Arms and munitions despite length of Russian troop massing came too little and too late
Leaving the Ukrainians to face and certain deadly and bloody fate
© February 19, 2022 The Alaskanpoet 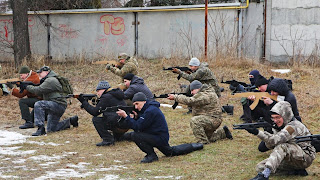 Posted by Michael P. Ridley aka the Alaskanpoet at 2:26 PM