RIDLEY’S BELIEVE IT OR NOT February 11, 2022
CV World Cases: The planet continues on an increasing basis with cases now over 408 million at 406,153,073 cases,  74,237,168 of which are active, 333,915,905  closed with 328,100,652 recoveries (98.26%), and passing the 5,800,000 barrier 5,815,253 deaths (1.74% )to continue the low trend of increased cases with increased recovery percentages and decreased death percentages with some plateaus, dips, and rises.
CV USA Cases: Total cases now exceeding 79 million at 79,106,782 with 28,661,760 active cases  of which 17,230  are serious or critical, (15,517 on 12/12) (back to steady decreases despite the increase in active cases due to the relative mildness of the Omicron variant) to .060 % of active cases (back to back steady decreases despite the increase in active cases due to the relative mildness of the Omicron variant  and to increase  the reduction from the 29,271 peak on 12/31/2020 to 12,041, 50,445,022 closures with 940,579 deaths (1.86%) and with 49,504,443 recoveries (98.14%). Our death rate percentage is .12% higher than the world’s death rate.
Standing: On a deaths per million population measure on a steady but slow climb to 2805 the U.S. ranks behind Peru (6156) the new number 1 which has had a quantum leap in deaths previously unmatched which was a change in the classification to give Peru the a new method of reporting; Bulgaria (4986), Hungary (4403), Romania (3210),  Brazil (2959), and Poland (2852) and slightly better than Argentina (2697), newly added to the list Columbia (2639), Belgium (2533),  Italy (2496), Mexico (2376),  UK (2328), Russia (2320), Chile (2083), France (2054), Spain (2052), Portugal (2014), Ecuador newly added to list (1998),  Bolivia (1779),  Sweden (1600) that never closed its economy down like we did, and Switzerland (1490).
Tests: No need to tally tests as testing programs are functioning well but the free rapid tests which the Biden Administration was caught flatfooted on the ease of transmission of the Omicron Variant and failed to order are not yet being produced.
US Vaccinations: As of 02/11/22   545.5 million doses, 598,432 per day last week ( 75% of population now vaccinated  with at least one shot)  and in California 88,684 per day  (which means at least 81% of the population of California has received at least one shot) which many believe is necessary to develop herd immunity (other than Flip Flop Fauci who may believe that 90% is required).  In California 70,204,178 total doses have been given (83.4%  of doses received to exceed the U.S. average of 81%), California has  moved  from 12th  to 11th of the 50 states in terms of the percentage of doses administered as a percentage of doses delivered to the states and at 69.6% of its population fully vaccinated compared to the U.S. average of 63.6% and has  moved from  to 12th to 10th  in terms of the percentage of the population fully vaccinated compared to other states.
Non  CV News:  It is looking more likely that not that Putin will not be deterred by the threat of economic sanctions and will massively invade Ukraine whose armed forces are totally outmatched in terms of numbers, technology and weapons and the hope that the Winter Olympics and the warming temperatures might delay is fading (Putin invaded the Crimea during the Winter Olympics held at Sochi, Russia); in what may be a Afghanistan déjà vu, Biden is warning Americans in the Ukraine to leave the country as most military experts believe while occupying the country may result in thousands of Russian body bags, conquering it up to its eastern borders will not; Reds have introduced legislation titled Halting the Use of Narcotics Through Effective Recovery Act which will be known as the Hunter Act to ban federal funds from being spent on crack pipes to be disbursed to addicts; Michelle Wu, the Blue Mayor of Boston in Instagram live streaming question and answer session of corona virus mandates unleashed a firestorm of very negative criticism from her constituents; more and more liberal members of the MSM are attacking Biden as he was pilloried for calling Lester Holt a “Wise guy” for asking him how temporary the inflation surge would be and saying that 14 Nobel Laureates (none of whom probably have been to the gas pump or supermarket isle recently) had advised him inflation would taper off; Pfizer wanting to assemble more data has asked the FDA for a pause in its request for authorization of its COVID-19 vaccine for children under 5; Ottawa Premier Doug Ford has declared a state of emergency due to the Freedom Convoy and a judge has issued a ruling demanding the disbanding of the trucker blockade of the Ambassador Bridge (our supply chain crisis is going to be worse given the number of goods that used  the bridge to come into this country); NYC residents hoping that a former NYPD Captain elected as NYC Mayor would help to decrease crime in their city were disappointed as in the last 5 days 23 people were shot with 10 homicides; as the second recall attempt of L.A. D.A. Gascon continues, news that high profile Blues are contributing to it may means this very liberal D.A’s days are number (concern for personal safety from crime has a tendency to cross the aisle); as Blue run cities and states are ending mask and vaccine mandates, leave it to the political cartoonists to explain the real reason behind the Blues’ actions: 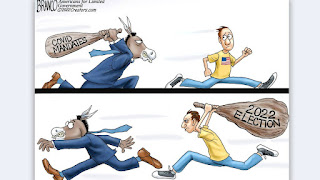 Chicago Gun Violence: Hey Jackass.com is alive and well to collect data to show that through February 10, 2022, gun violence involving mostly persons of color shooting mostly persons of color in Chicago is alive and well with 298 shot of whom 65 have died while 2021 shootings numbers compared to 2020 are 4544 to 4248 and deaths are 846 compared to 797.
As always, I hope you enjoy today’s holidays and observances, factoids of interest for this day in history,  a recording link to “Memories Are Made of This” by Dean Martin, the fact that you do not tolerate snobocracy; and opposing quotes by Ramzi Yousef and Judge Kevin Duffy on the 1993 World Trade Center Bombing, secure in the knowledge that if you want to send a gift for any memorable events like Valentine’s Day or St. Patrick’s Day, college graduations, birthdays, weddings, or anniversaries, you know that the Alaskanpoet can provide you with a unique customized poem at a great price tailored to the event and the recipient. Please contact me for details on pricing.
1.   National Pro Sports Wives Day—created by the Pro Sports Wives Association and first celebrated on this day in 2006 to promote for the benefit of active and retired pro athletes, coaches, trainers, and sports executives mental health and wellness programs.
2.  International Day of Women and Girls in Science—created by the UN General Assembly on December 22, 2015 to promote women and girls to enter the fields of science and honor the accomplishments of women and girls in those fields.
3.  1956  Number 1 Song—the number 1 song in 1956  on this day was  “Memories Are Made of This” by Dean Martin on a run of 5 weeks in that position to join 14 other songs that achieved number 1 status. Here’s a recording of Dean Martin singing “Memories Are Made of This”: https://www.youtube.com/watch?v=mv9PSkNkUfs.  Martin was known as the ”King of Cool” as a singer, comedian and member of the Rat Pack but sadly was also a heavy smoker whose genes dodged the lung cancer bullet until diagnosed with it in 1993 but refused surgery to prolong his life and died on Christmas Day 1995 at age 78.
4.  Word of the Day—the word of the day is “snobocracy” which means a government of snobs which sadly describes too many of our politicians in the Swamp or state capitals who feel laws are for mere mortals but not for them.
5.  You Don’t Need a Rifle to Be a Hero—celebrating the birth on this day of Desmond Doss, who became the first conscientious objector and only one to be awarded the Medal of Honor in World War II  for rescuing 75 soldiers during the Battle of Okinawa and whose exploits were memorialized in the movie Hacksaw Ridge in 2016 directed by Mel Gibson. Doss passed away on Mach23, 2006.
On this day in:
a. 1900 a Chinese immigrant falls ill to the bubonic plague, the first plague occurring in the continental United States.
b. 1962 the U.S. bans all Cuban exports and imports.
c. 1986 28 years of one family dictatorial rule Haiti ended when President Jean Claude Duvalier (“Baby Doc”) fled the country due to riots against his rule.
d. 1995 Ramzi Yousef was arrested in Pakistan and returned to the U.S. for trial and conviction which resulted in a sentence of life without parole plus 240 years for the 1993 World Trade Center Bombing. He is rotting away in a Supermax federal prison showing no signs of remorse and defiant as ever that the true terrorists are the U.S. and Israel.
e. 2013 in a better late than never the Mississippi Secretary of State certified the 1995 ratification of the 13th Amendment banning slavery to complete the process of the last state to ratify the amendment.
Reflections on terrorists’ justification for terrorist acts and response from the judge sentencing a terrorist:
“The Government in its summations and opening statement said that I was a terrorist. Yes, I am a terrorist and I am proud of it. And I support terrorism so long as it was against the United States Government and against Israel, because you are more than terrorists; you are the one who invented terrorism and using it every day. You are liars, butchers, and hypocrites.” Ramzi Yousef at his sentencing hearing before sentence was handed out.
“ Ramzi Yousef, you claim to be an Islamic militant. Of all the persons killed or harmed in some way by the World Trade Center bomb, you cannot name one who was against you or your cause. You did not care, just so long as you left dead bodies and people hurt.
“ Ramzi Yousef, you are not fit to uphold Islam. Your God is death. Your God is not Allah ...”
“ You weren't seeking conversions. The only thing you wanted to do was to cause death. Your God is not Allah. You worship death and destruction. What you do, you do not for Allah; you do it only to satisfy your own twisted sense of ego.”
“ You, Ramzi Yousef, came to this country pretending to be an Islamic fundamentalist, but you cared little or nothing for Islam or the faith of the Muslims. Rather, you adored not Allah, but the evil that you yourself have become. And I must say that as an apostle of evil, you have been most effective.” U.S. District Judge Kevin Duffy before sentencing Yousef to life imprisonment without possibility of parole plus 240 years.
Please enjoy the poems on events of interest on my twitter account below (if you like them, retweet, and follow me) and follow my blogs. Always good, incisive and entertaining poems on my blogs—click on the links below. Go to www.alaskanpoet.blogspot.com for Ridley’s Believe It Or Not—This Day in History,  poems to inspire, touch, emote, elate and enjoy and poems on breaking news items of importance or go to  Ridley's Believe It Or Not for just This Day in History.

© February 11, 2022,  Michael P. Ridley aka The Alaskanpoet
Alaskanpoet for Hire, Poems to Admire
Poet Extraordinaire, Beyond Compare
A Unique Gift, All Recipients Receive a Lasting Lift

Posted by Michael P. Ridley aka the Alaskanpoet at 11:42 AM