February 16, 2022 Ridley's Believe It Or Not Kyoto Protocol Day

CV World Cases: The planet continues on an increasing basis with cases now over 418 million at 418,072,646 cases,  70,813,161 of which are active, 347,259,485  closed with 341,390,847 recoveries (98.31%), and passing the 5,800,000 barrier 5,868,638 deaths (1.69% )to continue the low trend of increased cases with increased recovery percentages and decreased death percentages with some plateaus, dips, and rises.
CV USA Cases: Total cases now exceeding 79 million at 79,785,241 with 29,011,618 active cases  of which 13,640  are serious or critical, (15,517 on 12/12) (back to steady decreases despite the increase in active cases due to the relative mildness of the Omicron variant) to .047 % of active cases (back to back steady decreases despite the increase in active cases due to the relative mildness of the Omicron variant  and to increase  the reduction from the 29,271 peak on 12/31/2020 to 15,631, 51,773,623 closures with 952,603 deaths (1.84%) and with 50,821,020 recoveries (98.16%). Our death rate percentage is .15% higher than the world’s death rate.
Standing: On a deaths per million population measure on a steady but slow climb to 2851 the U.S. ranks behind Peru (6187) the new number 1 which has had a quantum leap in deaths previously unmatched which was a change in the classification to give Peru the a new method of reporting; Bulgaria (5067), Hungary (4454), Romania (3261),  Brazil (2981), and Poland (2882) and slightly higher than Argentina (2720), Columbia (2658), Belgium (2551), Italy (2519), Mexico (2395), Russia (2345), UK (2337), Chile (2102), Spain (2081), France (2074), Portugal (2036), Ecuador (1938),  Bolivia (1789),  Sweden (1635) that never closed its economy down like we did, and Switzerland (1496).
US Vaccinations: As of 02/16/22   548 million doses, 525.423 per day last week ( 75.3%) of population now vaccinated  with at least one shot)  and in California 68,209 per day  (which means at least 81.2% of the population of California has received at least one shot) which many believe is necessary to develop herd immunity (other than Flip Flop Fauci who may believe that 90% is required).  In California 70,561,599 total doses have been given (83.5%  of doses received to exceed the U.S. average of 81%), California has  moved  from 14th to 13th  of the 50 states in terms of the percentage of doses administered as a percentage of doses delivered to the states and at 69.8% of its population fully vaccinated compared to the U.S. average of 63.9% and has  moved from  9th to 10th  in terms of the percentage of the population fully vaccinated compared to other states (nothing like a recall election to get Newsom’s attention and performance).
Non  CV News:  Prime Minister Trudeau made an antisemitic fool of himself responding to a member of the Conservative Party in the House of Commons who is Jewish and a descendant of survivors of the Holocaust by attacking the Conservative Party as wavers of swastika flags and then after the House erupted in raucous boos refused to apologize and fled the House (wonder if Trudeau has be boning up on the Blues’ political playbook); after amassing 180,000 troops on its and Belarus’ border with Ukraine, Russia lied that it was removing troops when in actuality was moving them into invasion positions; a Finnish member of Parliament is being criminally prosecuted for her support of the Bible when she condemned her church’s support of a LGBTQ Pride event; Max Rose, a one term New York Blue member of Congress who lost his seat to Red Nicole Malliotakis, is tossing a race card claiming the U.S. is the Saudi Arabia of “white supremacists”; Hillary Clinton true to form after refusing to respond to Durham’s bombshell of paying to hack into Trump Tower and the White House after election to spy on Trump to foster the false narrative of his Russian collusion, lashed out at Fox News desperate attempt to spin the narrative away from Trump’s illegalities (will she finally be held accountable for a lie too many?); Ilhan Omar must see the Red Wave surging toward her seat as she slams journalists for making it easier to hassle the donors contributing to the Canadian Freedom Convoy ( we applaud her but one tweet does not wash away the damage of her leftist, antisemitic tweets over her time in office); baristas at over 100 Starbucks locations have joined in an effort to unionize; since Hillary after her server wiping must be an expert in destroying evidence leave it to the political cartoonist to portray her reaction to Durham’s bombshell: 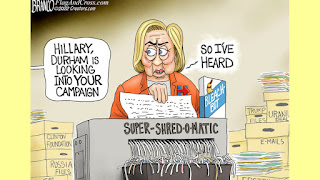 Chicago Gun Violence: Hey Jackass.com is alive and well to collect data to show that through February 15, 2022, gun violence involving mostly persons of color shooting mostly persons of color in Chicago is alive and well with 317 shot of whom 71 have died while 2021 shootings numbers compared to 2020 are 4544 to 4248 and deaths are 846 compared to 797.
As always, I hope you enjoy today’s holidays and observances, factoids of interest for this day in history, a video recording link to “Teen Angel” by Mark Dinning, the fact that you rarely forget to input a needed solidus when online; and  quotes by Alan Shattuck and the response by Elizabeth Perotrovich, secure in the knowledge that if you want to send a gift for any memorable events like Valentine’s Day or St. Patrick’s Day, college graduations, birthdays, weddings, or anniversaries, you know that the Alaskanpoet can provide you with a unique customized poem at a great price tailored to the event and the recipient. Please contact me for details on pricing.
1.   Kyoto Protocol Day—celebrating the effective day of the Kyoto Protocol and international agreement to control and limit the emissions of greenhouse gases on this day in 2005, which sadly given the absence of firm reduction targets by developing nations has had a very modest success in curbing the growth of carbon emissions.
2.  National Tim Tam Day—commemorating that Australian  chocolate bikkie (cookie) which consists of 2 malted chocolate biscuits, 1 chocolate cream and the other chocolate coated which are made by Arnott’s of Australia and introduced to the market in 1964 and were the only cookie probably to be named after a horse—Tim Tam, the 1958 winner of the Kentucky Derby and the Preakness Stakes but who lost a chance to claim the Triple Crown by losing at Belmont Stakes.
3.  1960  Number 1 Song—the number 1 song in 1960  on this day was  “Teen Angel” by Mark Dinning on a run of 2 weeks in that position to join 19 other songs that achieved number 1 status and 11 other acts that achieved their first number one song. Here’s a recording of Mark Dinning singing “Teen Angel”: https://www.youtube.com/watch?v=KG_VIcoiCFA  Dinning was a singer who had 3 minor hits after “Teen Angel”, battled alcohol addiction that hobbled his career and died of a heart attack on March 22, 1986.
4.  Word of the Day—the word of the day is “solidus” which means a forward slash which we often see in website addresses.
5.  And The Beat Goes On—celebrating the birth on this day in 1935 of noted singer, songwriter, Palm Springs Mayor, and Congressman Sonny Bono who sang with his wife Cher who delivered a eulogy at his wife Mary’s request. Sadly while skiing on January 5,1998, he collided with a tree at Heavenly Mountain Resort at South Lake Tahoe and died.
On this day in:
a. 1937 to the joy of fashion-conscious women Wallace H. Carothers received a patent for nylon.
b. 1945 the Alaska Equal Rights Act of 1945, the first anti-discrimination law in any state or territory of the United States was passed ending Jim Crow like practices inflicted on Alaska Natives since Alaska was purchased from Russia.
c. 1968 in Haleyville, Arkansas the first 911 Emergency Telephone System went into effect.
d. 1985 Hezbollah, the Shia political and militant group, was formed to the bane of western nations who have suffered over the years from its terrorist acts.
e. 2005 the last Mobile Army Surgery Hospital (MASH) was decommissioned  but not before being memorialized in a film and TV series of the same name.
Debate over the Alaska Anti-Discrimination Law:
Alan Shattuck, Alaska Territorial Senator from Juneau: “"Who are these people, barely out of savagery, who want to associate with us whites, with 5,000 years of recorded  civilization behind us?”
Elizabeth Perotrovich, a Tlingit of the Alaska Native Brotherhood who responded: “I would not have expected that I, who am barely out of savagery, would have to remind gentlemen with five thousand years of recorded civilization behind them, of our Bill of Rights” Slam dunk response that shamed the Territorial Legislature to pass the legislation.
Please enjoy the poems on events of interest on my twitter account below (if you like them, retweet, and follow me) and follow my blogs. Always good, incisive and entertaining poems on my blogs—click on the links below. Go to www.alaskanpoet.blogspot.com for Ridley’s Believe It Or Not—This Day in History,  poems to inspire, touch, emote, elate and enjoy and poems on breaking news items of importance or go to  Ridley's Believe It Or Not for just This Day in History.

© February 16, 2022,  Michael P. Ridley aka The Alaskanpoet
Alaskanpoet for Hire, Poems to Admire
Poet Extraordinaire, Beyond Compare
A Unique Gift, All Recipients Receive a Lasting Lift

Posted by Michael P. Ridley aka the Alaskanpoet at 2:12 AM