February 12, 2022 Ridley's Believe It Or Not Lincoln's Birthday

RIDLEY’S BELIEVE IT OR NOT February 12, 2022
CV World Cases: The planet continues on an increasing basis with cases now over 410 million at 410,035,876 cases,  74,843,521 of which are active, 336,192,355  closed with 330,367,452 recoveries (98.27%), and passing the 5,800,000 barrier 5,824,903 deaths (1.73% )to continue the low trend of increased cases with increased recovery percentages and decreased death percentages with some plateaus, dips, and rises.
CV USA Cases: Total cases now exceeding 79 million at 79,247,404 with 28,629,285 active cases  of which 16,787  are serious or critical, (15,517 on 12/12) (back to steady decreases despite the increase in active cases due to the relative mildness of the Omicron variant) to .057 % of active cases (back to back steady decreases despite the increase in active cases due to the relative mildness of the Omicron variant  and to increase  the reduction from the 29,271 peak on 12/31/2020 to 12,484, 50,618,119 closures with 942,381 deaths (1.86%) and with 49,575,738 recoveries (98.14%). Our death rate percentage is .13% higher than the world’s death rate.
Standing: On a deaths per million population measure on a steady but slow climb to 2820 the U.S. ranks behind Peru (6169) the new number 1 which has had a quantum leap in deaths previously unmatched which was a change in the classification to give Peru the a new method of reporting; Bulgaria (4999), Hungary (4403), Romania (3233),  Brazil (2964), and Poland (2861) and slightly better than Argentina (2701),  Columbia (2642), Belgium (2538),  Italy (2500), Mexico (2380),  UK (2330), Russia (2325), Chile (2088), France (2054), Spain (2052), Portugal (2019), Ecuador newly added to list (1928),  Bolivia (1780),  Sweden (1614) that never closed its economy down like we did, and Switzerland (1490).
Tests: No need to tally tests as testing programs are functioning well but the free rapid tests which the Biden Administration was caught flatfooted on the ease of transmission of the Omicron Variant and failed to order are not yet being produced.
US Vaccinations: As of 02/12/22   546.0 million doses, 577,156 per day last week ( 75.1% of population now vaccinated  with at least one shot)  and in California 88,684 per day  (which means at least 81% of the population of California has received at least one shot) which many believe is necessary to develop herd immunity (other than Flip Flop Fauci who may believe that 90% is required).  In California 70,293,452 total doses have been given (83.4%  of doses received to exceed the U.S. average of 80.9%), California has  moved  from 11th  to 14th of the 50 states in terms of the percentage of doses administered as a percentage of doses delivered to the states and at 69.6% of its population fully vaccinated compared to the U.S. average of 63.7% and has  moved from  10th  to 11th  in terms of the percentage of the population fully vaccinated compared to other states.
Non  CV News:  Further evidence that Blues are leaving the sinking Biden ship as an anonymous Blue Senator in the Los Angeles Times has characterized Schumer’s and Klaine’s attack on Manchin for his refusal to support the Build Back Better plan as idiotic (do not be surprised if a few more points continue to drop from Biden’s approval ratings that Blue names start coming out of the disapproval closet); in what hopefully is not a warmup to riots we witnessed in Minneapolis following George Floyd’s death 50-100 protestors defied the cold to vandalize buildings in Minneapolis and block traffic over the police shooting death of Amir Locke who was sleeping with a gun in his hand and was shot and killed as police were executing a “no knock” warrant (debate really needs to had on what type of arrests merit such policy); Elon Musk has warned that the U.S. due to its soaring national debt is “living on borrowed time and something has got to give” (he is a man that denizens of the Swamp should really listen to); some 50 million Americans have recovered from COVID-19 some of whom continue to be plagued with an assortment of maladies known as Long COVID but hope has appeared in the form of studies linking antihistamines to management of such symptoms; the State Department is urging Americans in Ukraine to leave immediately due to increasing signs of an immediate Russian invasion; Canadian police are in the process of clearing the protestors blocking the Ambassador Bridge after the 7:00 P.M. deadline last night expired and a “Freedom Convoy” in Paris at the Arc de Triomphe was met by police with tear gas; Red Rep Rosendale of Montana has introduced a bill to ban military aid and assistance to Ukraine until we have operational control over our southern border (bill appeals to the millions of Americans frustrated by the daily surge of illegals but unlikely to pass and could embolden Russia not only to invade but also seek to conquer more of the country); the Nice Guy Restaurant in Los Angeles favored by celebrities may want to change its name after at a Justin Bieber after performance party 4 people were shot with the suspect at large; as Russia’s invasion of Ukraine grows nearer each passing moment, leave it to the political cartoonist to portraying the president moving from one foreign policy disaster to another and wondering whether after the Beijing Olympics are over a Taiwan invasion by China is next: 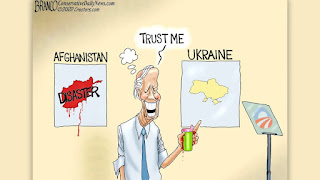 Chicago Gun Violence: Hey Jackass.com is alive and well to collect data to show that through February 10, 2022, gun violence involving  mostly persons of color shooting mostly persons of color in Chicago is alive and well with 301 shot of whom 67 have died while 2021 shootings numbers compared to 2020 are 4544 to 4248 and deaths are 846 compared to 797.
As always, I hope you enjoy today’s holidays and observances, factoids of interest for this day in history, a video recording link to “Too Much” by Elvis Presley, the fact that if you have a sobriquet, you happy with it; and a quote on the NAACP by Rep. Burgess Owens, secure in the knowledge that if you want to send a gift for any memorable events like Valentine’s Day or St. Patrick’s Day, college graduations, birthdays, weddings, or anniversaries, you know that the Alaskanpoet can provide you with a unique customized poem at a great price tailored to the event and the recipient. Please contact me for details on pricing.
1.   Lincoln’s Birthday—celebrating the birth on this day in 1809 of Abraham Lincoln who is regarded by most historians as one the best presidents we have ever had, preserving the nation during the Civil War and emancipating the slaves in Confederate states and whose idea toward the states of the Confederacy of “With malice toward none with charity for all with firmness in the right as God gives us to see the right let us strive on to finish the work we are in to bind up the nation's wounds” was tragically doomed by John Wilkes Booth’s bullet on April 14, 1865 just 41 days after he expressed that vision in his 2nd Inaugural Speech.
2.  Red Hand Day—created by the UN General Assembly in 2002 to promote the prevention of using children as soldiers in war.
3.  1957  Number 1 Song—the number 1 song in 1957  on this day was  “Too Much” by Elvis Presley on a run of 3 weeks in that position to join 19 other songs that achieved number 1 status. Here’s a video recording of Elvis Presley singing “Too Much”:  https://www.youtube.com/watch?v=uieAO76nld4.  Martin was known as the ”King” and sold over 500 million records before after abuse of prescription drugs and an unhealthy diet died from a heart attack on August 17, 1977 at age 42.
4.  Word of the Day—the word of the day is “sobriquet” which means a nickname like “Old Ironsides” for the USS Constitution which can be laudatory or demeaning like “Brandon” for President Biden.
5.  Rope Is Stronger Than the Pen—bemoaning the birth on this day in 1885 of Julius Streicher, rabid anti-Semitic Nazi who founded Der Sturmer, an essential anti-Semitic tool for the Nazis and because of his influence in urging the “Final Solution” was convicted of War Crimes against Humanity and hanged as the first convicted Nuremberg  War Crimes Criminal on October 16, 1946 in a hanging that did not break his neck causing him to be slowly and painfully strangled to death.
On this day in:
a. 1909 the National Association for the Advancement of Colored People  (“NAACP”) was founded.
b. 1974 Alexander Solzhenitsyn, the winner of the Nobel Prize for Literature in 1970 was expelled from the Soviet Union.
c. 1999 President Bill Clinton was acquitted along party lines in his impeachment trial.
d. 2004 under the directions of Mayor Gavin Newsom, the City of San Francisco began issuing same sex marriage license.
e. 2016 Pope Francis and Patriarch Kirill signed an Ecumenical Declaration following the first meeting of the leaders of the Catholic Church and the Russian Orthodox Church since their split in 1053.
Reflections on the formation of the NAACP: The NAACP was not a black-run, black-originated organization. It was run by 21 white, socialist, atheist, Marxist Democrats. It was the antithesis of Rev. Martin Luther King Sr.'s community at that time, which was capitalist, Christian, very pro-life, and pro-America.” Burgess Owens, former pro football player and Red Member of the House of Representatives from Utah.
Please enjoy the poems on events of interest on my twitter account below (if you like them, retweet, and follow me) and follow my blogs. Always good, incisive and entertaining poems on my blogs—click on the links below. Go to www.alaskanpoet.blogspot.com for Ridley’s Believe It Or Not—This Day in History,  poems to inspire, touch, emote, elate and enjoy and poems on breaking news items of importance or go to  Ridley's Believe It Or Not for just This Day in History.

© February 12, 2022,  Michael P. Ridley aka The Alaskanpoet
Alaskanpoet for Hire, Poems to Admire
Poet Extraordinaire, Beyond Compare
A Unique Gift, All Recipients Receive a Lasting Lift

Posted by Michael P. Ridley aka the Alaskanpoet at 9:29 PM