March 16, 2018 Ridley's Believe It Or Not Freedom Of Information Day

Ridley’s Believe It Or Not For March 16, 2018 Red Senator Jeff Flake lives up to his name with speculation that he may run against Trump in 2020 (good luck on that Jeff); Trump is talking about a Phase II Tax Cut that would force Lamb to put his vote where his campaign was and vote against Pelosi’s wishes; Trump has persuaded Tarkanian not to mount a primary challenge against Red incumbent Heller and instead run for the House in the interests of party unity; New Yorker stoops to an all time low by body shaming Trump standing nude behind a podium: 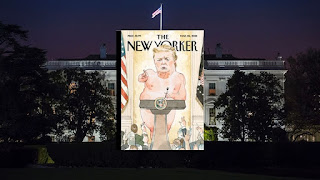 (totally disgusting but so typical of the leftist press); the two companies involved in building the pedestrian bridge that collapsed in Miami shortly after installation and killed 6 people and injured 10 others has a less than stellar record in terms of competence (watch for some jail time of the executives involved); the DHS has revealed that the Russians tried hack into our power grid and new sanctions have been announced; on the winter/summer romance front Don McLean at 72 is dating vivacious model 24 year old Paris Dylan (maybe a new song “Hi, Hi Miss American Pie?”); another rotten  smell emanating from Strzok and Page text messages as we learn that the judge hearing Flynn’s guilty plea was a good friend of Strzok but did not recuse himself until after the guilty plea was entered; the witch-hunt shows no sign of winding down as Mueller is serving the Trump organization with subpoenas of financial records (when doe Trump fire Sessions and Rosenstein and appoint a new AG who fires Mueller); in Chicago through March 15, 2018 434 people have been shot of whom 79 have died  but in what has to be a record for the last 5 days, no one has been shot and killed.
As always, I hope you enjoy today’s holidays and observances, a music link to Mark Ronson feat Bruno Mars; factoids of interest for this day in history, holding politicians like HRC in ludibry and a relevant quote by Isabelle Huppert acting, secure in the knowledge that if you want to find a gift for any memorable events like birthdays, weddings, or anniversaries, you know that the Alaskanpoet can provide you with a unique customized poem at a great price tailored to the event and the recipient. You need only contact me for details.
1. National Preschool Teachers Appreciation Day—celebrating vital contributions of preschool teachers to our children and parents by enabling both to continue working.
2. National Freedom of Information Day—commemorating the impact of James Madison in the drafting of the Constitution and especially the Bill of Rights with its freedom of the press in the First Amendment.
3. 2015 Number One Song— the number one song in 2015 on a run of 14 weeks in that position “Uptown Funk” by Mark Ronson feat. Bruno Mars. Here is a recording of the song:  https://www.youtube.com/watch?v=OPf0YbXqDm0
4. Word of the Day—today’s word of the day is “ludibry” which means contempt or derision which describes HRC’s feelings toward Main Street Americans to a tee and why she lost.
5. Another Day Another César Award Nomination-- celebrating the birth on this day in 1955 of noted French actress Isabelle Huppert who has been nominated for a record 16 César Awards (the French equivalent of our Academy
Awards).
On this day in:
a. 1926 Robert Goddard successfully launched the world’s liquid fueled rocket from a launch site in Auburn, Massachusetts.
b. 1968 in a very bad day for the U.S. Army, American soldiers at the village of Mai Lai, South Vietnam killed between 347 and 500 civilian men, women and children.
c. 1988 Saddam Hussein’s forces attacked the Kurdish town of Halabja with poison and nerve gasses, killing 5,000 and injuring some 10,000,
d. 1995 in a better late than never moment, Mississippi became the 50th state to ratify the 13th Amendment abolishing slavery.
e. 2014 in what many believe to be an illegal referendum, voters in Crimea voted to leave the Ukraine and return to Russia.
Reflections on acting by one very talented actress: “Doing movies for me is like a vacation. Stage for me is like climbing a big mountain, and movies for me is like doing a nice little walk.” Isabelle Huppert Please enjoy the poems on events of interest on my twitter account below (if you like them, retweet and follow me) and follow my blogs. Always good, incisive and entertaining poems on my blogs—click on the links below. Go to www.alaskanpoet.blogspot.com for Ridley’s Believe It Or Not—This Day in History, poems to inspire, touch, emote, elate and enjoy and poems on breaking news items of importance or go to  Ridley's Believe It Or Not for just This Day in History.
© March 16, 2018 Michael P. Ridley aka the Alaskanpoet
Alaskanpoet for Hire, Poems to Admire
Poet Extraordinaire Beyond Compare


The Perfect Gift, All Recipients to Receive Lasting Lift
Posted by Michael P. Ridley aka the Alaskanpoet at 5:34 PM