U.S.A. Pride Seems to Be Missing from U.S. Soccer Team and Coach's Shirt

That should not be a controversy since in many stadiums alcohol consumption has been the cause
Large chaotic fights and brawls among spectators breaking all manner of laws
No wonder in this nation where serving beer is allowed the spigots end before the game
To while the game continues the proclivity for alcohol fueled fans running amok is tamed
But in an world athlete events were the fans of different nations are consumed with national pride
The U.S. Soccer Team appears to any pride in representing this nation curtail or hide
The iconic U.S.A. logo with a U.S.A. gay pride logo has been replaced
And the coach wore a plain black Nike shirt with the logo “STATES” and the “United” erased
China, Russia, Iran, and North Korea seeing this must be licking their chops
If the U.S. is really only 50 separate states, it will quickly fall from the top
When it comes to human rights we should never against gays and lesbians discriminate
Nor should they be allowed to on the straights have their life style dominate 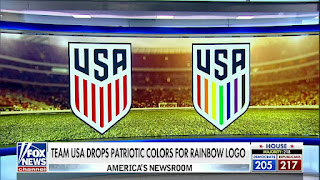