In the needed role of being an Edith it looks like Jill may no longer be the one cast
She should be honored in her efforts to protect Biden from dementia in the two years past
But there now looks like a new Edith has arrived
Who believes from cognitive stroke disasters she helped Fetterman survive
Listening to Fetterman it should be clear a cognitive recovery he lacks
And Giselle Fetterman his surrogate was taking up his mental slack
It is said that a photo is worth a thousand words or more
A social media posting of her and the senator-elect at his office crops him half out the door
She is front and center looking like she not he  in charge will be
He is in a suit not a hoody hands clasped with body language showing anxiety
Over the difficulties he will as a cognitively recovering senator face
Or a realization that his wife looks like she wants to run the place?
We wish him for the next 6 years well
And hope another stroke does not send him deeper into cognitive Hell
© November 15, 2022 The Alaskanpoet 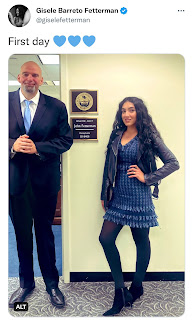 Posted by Michael P. Ridley aka the Alaskanpoet at 6:22 PM