The malignant cancer of Woke on college campuses continues to grow
To the seeds of CRT and cancel culture sow
In Trinity College in Connecticut students were ordered to from outside their dorm windows remove
Two variations of Old Glory—the Gadsden Flag and the Thin Line because anonymous students felt threatened and disapproved
When the students questioned the flag removers why
They were told dean’s orders and forcibly removed them when they didn’t comply
Yet in true Woke form Gay Pride and LBGT+ were not removed for days
The college claimed do discrimination as the student handbook prohibits signs outside of windows to display
The coiled rattlesnake with its hiss of “Don’t Tread on Me” was adopted by the first Marines in 1775
To warn Great Britain against its tyranny the colonies would fight to insure their rights would survive
The Thin Flag with stripes of blue, green and red stripes, honoring police, military and federal agents, and firefighters who are sworn to us protect
Hard to believe the a college student would by the display of this flag feel threatened and object
We seem not to be turning out students to learn, question then face the rigors outside the ivy vines
But rather students more like lobsters and crabs molting and by their thin skins defined
In their jobs at the first sign of feeling threatened to their parents’ basement retreat
Spineless ill trained and ill prepared to face the certainty of some of life’s defeats 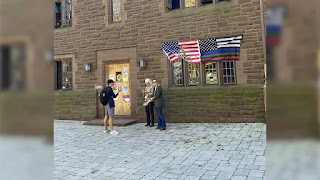 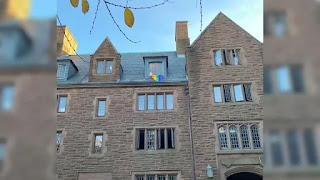 Posted by Michael P. Ridley aka the Alaskanpoet at 4:52 PM