July 30, 1921 Ridley's Believe It Or Not National Whistleblower Appreciation Day

CV Open Gate: Lost in the pronouncements by Biden and his lackeys  that there is no crisis of illegals surging across the border is that fact that COVID-19 is alive and well and spreading in the Northern Triangle and Mexico which has been passed by Argentina and newly added Columbia to move down to 12th  on my list of deaths from the pandemic  at 1841/M with a fatality rate of 9.87% of closed cases and the 3 countries in the Northern Triangle in terms of active cases and deaths per million are as follows even though the data may be suspect as underreported (regardless of number we need no more cases):
Guatemala:  Active Cases:  34,955 Deaths/M 561
Honduras:    Active Cases: 186,889 Deaths/M 774
El Salvador:  Active cases:     7,742 Deaths/M 401
US Vaccinations: As of 7/30,21 344.9 million doses at .652 million per day (7 months to go for 75% of population vaccinated) and in California 82,509 per day which means if the rate does not increase it will take us now some 5 months to have 75% of the population of California vaccinated which many believe is necessary to develop herd immunity (other than Flip Flop Fauci who may believe that 90% is required).  In California 45,044,810 total doses have been given (88.5% of doses received to exceed the U.S. average of 86.6%), but even with the pressure of a recall to be scheduled this fall which hopefully end Newsom’s term, California has  moved  up from 19th to 18th   of the 50 states in terms of the percentage of doses administered as a percentage of doses delivered to the states and at 52.7% of its population fully vaccinated compared to the U.S. average of 49.5% is still 17th among the 50 states.  A long way to go still to get herd immunity in terms of getting vaccines received into arms and the percentage of the population fully vaccinated compared to other states which means a great reason to recall this inept and hypocritical governor.
Non  CV News: The CDC Director has indicated that vaccination mandates are under serious consideration as cases from the Delta variant are surging but vaccinations are not and way below the million plus daily achieved several weeks ago; the head of the Postal Union is opposing Biden’s mandatory vaccine mandate for federal works but at least encouraging workers to get vaccinated; Governor Abbot, whose state Texas is plagued with CV infected illegals pouring across his border while the Biden Administration is playing the fiddle tune of no crisis, has signed an executive order banning mask and vaccination mandates in his state; the rich will get richer and the poor get poorer is a mantra of the Blues but it may also be true in college sports with the ability of athletes to be paid for their likeness as Texas and Oklahoma will be joining the SEC in 2025 (wonder if antitrust rule can be applied to college football conferences?); Mayor Garcetti has learned the hard way that in L.A. don’t mess with the homeless as his home was vandalized soon after signing a ordinance that limited homeless encampments in the city; on the food front almost 300,000 pounds of raw hamburger prepared by an Omaha meat processor have be recalled due to e-coli contamination and more Brightfood packaged lettuce sold at Walmart has been recalled due to salmonella concerns; the ACLU has further distanced itself from reality by inanely claiming the 2nd Amendment is rooted and based upon racism; the DOJ may have to change its name to Department of Hacked as 27 U.S. Attorneys around the nation were hacked; up to $125 million of COVID-19 relief funds distributed to CCNY will be going to forgive student debt including debt of illegal aliens (hopefully Harris chalks that largesse as one of the root causes of illegal immigration); 6 passengers on a Royal Caribbean Cruise have test positive—4 vaccinated adults, 3 of whom have no symptoms and 1 of whom has mild symptoms and 2 unvaccinated children who have no symptoms; in a refreshing note to the consternation of Blues who adhere to the myth that racism is only prevalent among Reds, Reds are demanding another hearing on Biden’s pick to head the ATF David Chipman was making denigrating racist comments about black ATF agents (when will Biden come to what little senses he has and withdraw the nomination of this rabid anti-2nd Amendment leftist?); as Biden continues to hector Americans to get vaccinated, he totally ignores and dismisses the fact that illegal aliens infected by COVID are also pouring across the border released into the interior maskless and unvaccinated to spread the disease, leave it to the political cartoonist to portray the gravity of this super spreader event: 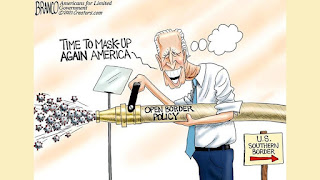 Chicago Gun Violence: Hey Jackass.com is alive and well to collect data to show that through July 27, 2021, gun violence involving mostly persons of color shooting mostly persons of color in Chicago is alive and well with 2529 persons shot of whom 434 have died.
As always, I hope you enjoy today’s holidays and observances, factoids of interest for this day in history, a video recording musical link to “Bad, Bad Leroy Brown” by Jim Croce,  the fact that you have never been exposed to scatology, and a quote by Robert Bothwell on Medicare, secure in the knowledge that if you want to send a gift for any memorable events like Labor Day, college graduations, birthdays, weddings, or  anniversaries, you know that the Alaskanpoet can provide you with a unique customized poem at a great price tailored to the event and the recipient. Please contact me for details on pricing.
1.  National Whistleblower Appreciation Day—created by the United States Senate on this day in 2013 to promote the protection of whistleblowers who expose fraud, corruption, waste and other illegal behavior on the behalf of “public servants” and to encourage public employees to become whistleblowers when they observe such conduct.
2.  World Day Against Trafficking in Persons—created by the UN General Assembly on December 18, 2013 and celebrated on this day since 2014 to promote the end of human trafficking which with our open border and cartel members getting rich bringing in illegals is a problem big time in this nation which the Biden Administration seems helpless to take any steps to curtail.
3. 1973 Number 1 Song USA—the number 1 song in 1973 on this day was “Bad, Bad Leroy Brown” by Jim Croce on a run of 2 weeks in that position to join 26 other songs that achieved number 1 status and as third person to achieve number 1 status posthumously, join 13 other acts who achieved their first number 1 song on the Billboard Hot 100. Here is a video recording by Jim Croce of “Bad, Bad Leroy Brown” by Jim Croce:    https://www.youtube.com/watch?v=QvwDohEEQ1E Croce had released 5 albums and numerous singles and had just completed a concert at Northwestern State to board a private plane with 3 others to head to Austin College for another concert on September 20, 1973 one day before the scheduled release of his single “I Got a Name” which reached number 10 in the charts. Sadly, due to pilot error the plane crashed on takeoff, killing all 5 on board.
4.  Word of the Day—the word of the day is “scatology” which means the study of excrement which also apply to the study of the news broadcasts of the Cack News Network, CNN.
5.  I’ll Be Back--celebrating the birth on this day in 1947 of noted bodybuilder, actor and governor of California first by recall and then a second term by election Arnold Schwarzenegger. Schwarzenegger is best known for his action films as Conan and in the Terminator series and sadly fell victim to the reptilian brain impregnating his housekeeper while his wife Maria Shriver was also pregnant; 14 years after his son out of wedlock was born the relationship was reveals resulting in his divorce from Shriver.

On this day in:
a. 1932 Walt Disney’s animated short Flowers and Trees premiered to become the first animated film to use Technicolor and the first animated short to win an Academy Award.
b. 1945 the Japanese submarine I-58 sunk the USS Indianapolis fortunately for us after and not before it had delivered the 2 atomic bombs to Tinian Island for dropping on Japan. Of the 1195 crew members, 300 went down with the ship 12 minutes after being torpedoed the rest went into the water without sufficient life rafts, food or water and it took the Navy 4 days to know they had lost a ship and find the survivors which had dwindled down to 316 due to shark attacks, exposure and dehydration.
c. 1965 to the joy of seniors, President Lyndon Johnson signed into law the Social Security Act of 1965 creating Medicare and Medicaid.

d. 1975 Jimmy Hoffa disappeared at around 2:30 p.m. from the parking lot of the Machus Red Fox restaurant in Bloomfield Hills, a suburb of Detroit, never to be seen or heard from again.
e.  2006 in all-good things have to come to an end sometime, the world’s longest running musical show, Top of the Pops, broadcast its last episode on BBC Two after 42 continuous years.
Reflections on Medicare: “We like to say medicare is uniquely Canadian, but Americans have Medicare too. Even the name. I can't actually determine where the name started, except that it appeared in the two countries at about the same time. Had the Vietnam War not occurred, the Americans would have had a Medicare system much like ours." Robert Bothwell, noted Canadian author

© July 30, 2021 Michael P. Ridley aka The Alaskanpoet
Alaskanpoet for Hire, Poems to Admire
Poet Extraordinaire, Beyond Compare
A Unique Gift, All Recipients a Lasting Gift

Posted by Michael P. Ridley aka the Alaskanpoet at 12:56 AM