Tests: We have now conducted 448,984,680 tests (now at 1,349,834/M) compared to number 2 now France at 1,172,798/M) as we are conducting more tests in number and on a per capital basis for all nations (other than those nations that contain small populations like Bahrain, Denmark, Israel, Malta, Singapore and UAE) other than the U.K. which remains as king of the mountain with respect to tests at 2,292,382/M.
CV Open Gate: Lost in the pronouncements by Biden and his lackeys that there is no crisis of illegals surging across the border is that fact that COVID-19 is alive and well and spreading in the Northern Triangle and Mexico which is 12th on my list of deaths from the pandemic at 1670/M and the 3 countries in the Northern Triangle in terms of active cases and deaths per million are as follows even though the data may be suspect as underreported:

US Vaccinations: As of 5/2/2021 245.6 million at 2.42 million per day in the last week sounds impressive but if the rate does not increase it will take us now reduced to some 3 months to have 75% of the population vaccinated which many believe is necessary to develop herd immunity. In California 31,135,031 total doses have been given (78.7% of doses received slightly less than the U.S. average of 78.6%), but even with the pressure of a recall to be scheduled this fall which hopefully end Newsom’s term, California has risen 29th to 27th tied with South Dakota  out of the 50 states in terms of the percentage of doses administered as a percentage of doses delivered to the states and at 31.7% of its population fully vaccinated compared to the U.S. average of 31.6% has risen slightly from  30th to 28th.  A long way to go to get herd immunity in terms of getting vaccines received into arms and the percentage of the population fully vaccinated compared to other states which means a great reason to recall this inept and hypocritical governor.

Non CV News: At Point Loma the not so subliminal Biden Message of if you get here you can stay and fill your bag with free goodies resulted in deadly consequences as an overloaded boat smuggling 30 illegals capsized near Point Loma, destroying the boat, killing 3 and sending 27 to the hospital (Biden’s policies have blood on his hands, more smuggling money into the hands of the cartels and yet Where’s Waldo is MIA on the growing crisis at the border for 39 days and counting); watching Biden wearing his mask if he can find it outdoors after being fully vaccinated and apparently oblivious to latest CDC flip flop that masks outdoors in small gatherings are not needed is like watching an Abbot and Costello routine of “Who’s On First” and sends the wrong signal to people delaying getting vaccinated that the vaccinations don’t work because our president is still wearing a mask; our once vaunted “free press” is in a complete free fall when it comes to Where’s Waldo—raves over her shoes and fashion and the fact she crochets but totally ignores her MIA on border’s deadly crisis; with a chip shortage becoming more and more of a problem for a variety of manufacturers, Intel has just announced plans to build a $10 billion chip manufacturing plant, sadly not here but in Israel (wonder what about Biden’s planned corporate tax increase plan drove their locational decision?).
While BLM protests have to often morphed into riots with burning and looting, leave it to the political cartoonist to reveal the blindness to a white guilt policy of not  criminally prosecuting looters that merely encourages them to loot more: 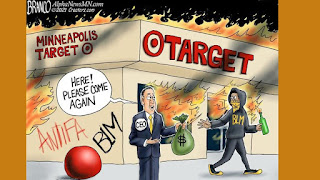 As always, I hope you enjoy today’s holidays and observances, factoids of interest for this day in history, a musical link to “Morning Train (Nine to Five)” by  Sheena Easton, that you enjoy using a rejoinder in arguments or discussion when the need arises and a quote by Leslie Gore on coming out,  secure in the knowledge that if you want to send a gift for any memorable events like Mother’s Day, college graduations, birthdays, weddings, or anniversaries, you know that the Alaskanpoet can provide you with a unique customized poem at a great price tailored to the event and the recipient. Please contact me for details on the pricing.

1. Motorcycle Mass and Celebration of the Bikes Day—not sure the identity of the Catholic priest who created this observance, but it has been observed on the first Monday of May since 1999 and given how deadly on the highways or streets a motorcycle collision can be a great idea to enlist the aid of the powers above but I would have thought the day to celebrate this would be either the first or last day of the Sturgis Motorcycle Rally.

2. World Tuna Day —procreated by the UN General Assembly in 2016 to promote sustainable fishing practices for this valuable food source.

3.  1981 Number 1 Song USA—the number 1 song in 1981 was “Morning Train (Nine to Five)” by Sheena Easton   on a run of 2 weeks in that position to join 16 other songs reaching number 1 and 9 other acts which achieved their first number 1 status. Here is a recording by Sheena Easton of “Morning Train (Nine to Five”:  https://www.youtube.com/watch?v=S_3vZYOYNYU Easton was born in Scotland and has 6 Grammy nominations and 2 awards to her credit, has a prolific recorder of albums and singles and has the distinction of being the only singer to have having a top 5 song in each of Billboard’s primary singles charts—pop and AC, country and AC and R&B and dance and in personal life has the dubious distinction of having 4 short-lived marriages from 8 months to 18 months before ending in divorce.

4.  Word of the Day—the word of the day is “rejoinder” which means a sharp and clever answer, something with Biden’s fading mental acuity you would never expect to hear.

5.  Win One for Secondhand Smoke? —celebrating the birth on this day in 1946 of noted singer, songwriter, actress and activist Lesley Sue Goldstein, better known to her fans as Lesley Gore. Lesley was a closet lesbian who did not come out until 2005 but was in a long-term relationship with her female partner Lois Sasson for 33 years who died from COVID-19 on December 30, 2020 but who had the misfortune of being a nonsmoker but contracting lung cancer and dying from it on February 16, 2015 at age 68.

a. 1964 in a bold move reminiscent of Italian midget submarines placing limpet mines of two Royal Navy battleships the HMS Queen Elizabeth and the HMS Valiant and sinking them in Alexandria Harbor in WWII, Viet Cong frogmen attached mines to the USS Card, an escort aircraft carrier, while she was berthed at the docks in Saigon, and sank her but like the two Royal Navy battleships, she was refloated and repaired and back in action in 7 months.

b. 1972 an early morning fire broke out in the Sunshine Mine located between Wallace and Kellogg, killing 92 miners in Idaho’s deadliest mine disaster.

c. 1989 the Soviet Union began to collapse when Hungary opened its gates to Austria, allowing a flood of East Germans to begin fleeing from East Germany.

e. 2011 Osama bin Laden, the mastermind behind the attacks of 9/11 and Number 1 on the FBI’s Most Wanted List, was killed in his compound in Abbottobad, Pakistan one half mile from Pakistan’s Kakul Military Academy by Navy Seals in an attack then Vice President Biden urged that the Seals not make.

Reflections on coming out: “I met a lot of young people in the Midwest, and I saw what a difference a show like In the Life [PBS Show on Gay and Lesbian issues] can make to their lives in some of these small towns where, you know, there are probably two gay people in the whole damn town.” Lesley Gore

© May 2, 2021 Michael P. Ridley aka The Alaskanpoet
Alaskanpoet for Hire, Poems to Admire
Poet Extraordinaire, Beyond Compare
A Unique Gift, All Recipients a Lasting Gift

Posted by Michael P. Ridley aka the Alaskanpoet at 1:01 AM