December 6, 2021 Ridley's Believe It Or Not National Gazpacho Day

RIDLEY’S BELIEVE IT OR NOT December 6, 2021
CV World Cases: The CV pandemic across the planet continues on an increasing basis with cases now over 266 million at 266,644,134 cases,  21,200,608 of which are active, 245,438,262  closed with 240,161,556 recoveries (97.85%), and cracking the 5,000,000 barrier 5,276,706 deaths (2.15% ))to continue the low trend of increased cases with increased recovery percentages and decreased death percentages with some plateaus, dips, and rises.
CV USA Cases: Total cases now over 50 million at 50,114,486 with 9,679,189 active cases of which 13,934  are serious or critical, (8,599 on 3/25/2021) (back to steady decreases with upticks despite the  Delta variable to .144% of active cases and to decrease the reduction from the 29,271 peak on 12/31/2020 to 15,337, 40,435,297 closures with 809,898 deaths (2.00%) and with 39,625,399 recoveries (98.00%). Our death rate percentage is .15% lower than the world’s death rate.
Standing: On a deaths per million population measure on a steady but slow climb to 2426 the U.S. ranks behind Peru (5988) the new number 1 which has had a quantum leap in deaths previously unmatched which was a change in the classification to give Peru the a new method of reporting; Bulgaria the new number 2 (4197), Hungary (3700), Romania (2999), Brazil (2868) which has been hit with a rapid rise in deaths now slowing down passed by Romania, Argentina (2548), and newly added to the list Columbia (2494),  and slightly better than Belgium (2330), Poland (2268), Mexico (2256), Italy (2226),  UK (2129),  Russia newly added to list (1934), (Chile (1991),  Spain (1885),  Ecuador newly added to list (1858), Portugal (1827), France (1826),  Bolivia (1615),  Sweden (1485) that never closed its economy down like we did, and Switzerland (1330).
Tests: No need to tally tests as testing programs are functioning well.
CV Open Gate: Lost in the pronouncements by Biden and his lackeys  that there is no crisis of illegals surging across the border is that fact that COVID-19 is alive and well and spreading in the Northern Triangle and Mexico which is  11th  on my list of deaths from the pandemic  at 22565/M with 348,385 active cases and a fatality rate of 8.31% of closed cases and the 3 countries in the Northern Triangle in terms of active cases and deaths per million are as follows even though the data may be suspect as underreported (regardless of number we need no more cases):
Guatemala:  Active Cases:     1079  Deaths/M   870
Honduras:    Active Cases: 245,799  Deaths/M 1028
El Salvador:  Active cases:   13,035  Deaths/M  580
US Vaccinations: As of 12/06/21 462.3 million doses,  .859 million per day (2 months left for 75% of population to be vaccinated) and in California 116,171  per day  (which means at least 79% of the population of California has received at least one shot which many believe is necessary to develop herd immunity (other than Flip Flop Fauci who may believe that 90% is required).  In California 59,768,100 total doses have been given (84.2%  of doses received to exceed the U.S. average of 80.4%), California has not moved from  8th of the 50 states in terms of the percentage of doses administered as a percentage of doses delivered to the states and at 63.3% of its population fully vaccinated compared to the U.S. average of 59.4% and has  moved from 12th tied with Colorado to 14th   in terms of the percentage of the population fully vaccinated compared to other states.
Non  CV News:  Jussie Smollett took the stand and provided some pretty salacious testimony at odds with why his supposed attackers have testified to and will continue being cross-examined tomorrow and as the jurors were dismissed for the day a stern warning from the judge not to be viewing the internet or Google on the trial (if a case of he said they said just one juror has to believe that his “attackers” were lying and dismissed in that juror’s mind the check from Smollett to them); looks like Chris Cuomo’s pal Don Lemon is mimicking him by providing Jussie Smollett as he was devastated by Cuomo’s being fired; the Cack News Network is in damage control mode over the firing of Chris Cuomo as Brian “Helter Skelter” Stelter whitewashed the firing and failed to mention Cuomo’s first sexual harassment accuser; while the evidence coming out of South Africa is that the Omicron Variant is very mild in terms of symptoms, Fauci it appears was the driving force behind the travel ban out of Africa and his pronouncements seem to have nothing to do with the science but rather designed to put the fear of God into Americans and more power in the hand of the ruling Blues; the PC wars to make the sexes gender neutral in failing in the Latino communities as the term “Latinix” is the new Woke term pushed by Blue Progressives to the dismay of the Latino community who despise the use of the name; in Afghanistan where we cut and run and left Americans and their Afghan allies behind, famine and starvation are descending upon the land; David Wright, the former CEO of the L.A. Department of Water and Power has agreed plead guilty to fraud in pushing through a lucrative $30 million contract with a company he was going to join shortly after the contract was signed without disclosing his conflict of interest; the pro felon L.A. D.A. Gascon  must have been emboldened as the recall effort against him failed due to lack of enough signatures as a second recall effort has be started as 14 thugs arrested in 11 smash and grab crimes have released to due Gascon’s low or zero bail policies; while Russia moves over 100,000 troops into its border with Ukraine and China is provoking Taiwan by sending fighter planes and bombers into Taiwan air space, the Biden Administration seems like a deer caught in headlights frozen to be able to create a proper response in both cases; China rapidly becoming our number one adversary is trying to open a military base at Equatorial Guinea’s port city of Bata on the Atlantic Ocean Coast; as Biden’s policies are looking more and more like fatal disasters, leave it to the political cartoonist to reveal what the Biden Grinch is stealing from us as Christmas time: 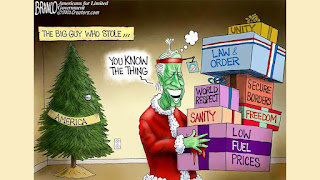 © December 6, 2021 Michael P. Ridley aka The Alaskanpoet
Alaskanpoet for Hire, Poems to Admire
Poet Extraordinaire, Beyond Compare
A Unique Gift, All Recipients Receive a Lasting Lift

Posted by Michael P. Ridley aka the Alaskanpoet at 1:58 PM