US Vaccinations: As of 4/16/2021 202.3 million doses have been given, 3.35 million per day in the last week (sounds impressive but if the rate does not increase it will take us now reduced to some 3 months to have 75% of the population vaccinated which many believe is necessary to develop herd immunity. In California 25,047,682 total doses have been given (78.41% of doses received to  near the U.S. average of 78.3%), but with the pressure of a certain recall coming endangering Newsom, California has risen from 31st to 24th tied with Oregon   out of the 50 states in terms of the percentage of doses administered as a percentage of doses delivered to the states and at 23.9% of its population fully vaccinated compared to the U.S. average of 24.3% has moved slightly up from 38th to 36th. A long way to go to get herd immunity and lagging in terms of getting vaccines received into arms and percentage of population vaccinated compared to other states and a great reason to recall this inept and hypocritical governor.
Non CV Case News: 19 year old Brandon Scott Hole, a former FedEx employee is alleged to have entered a FedEx facility in Indianapolis and killing 8 people before turning the gun on himself, had police come to his home a year ago due to his threats of suicide and had a shotgun he owned confiscated by and was subject to mental evaluation (wonder how with background checks he was able to procure the firearm he used or whether the Blues new gun control bill would have prevented his purchase of the firearm used); Psaki as usual rushing to judgment following release of the body cams of the Adam Toledo shooting intoning there is too much excessive force used by police against blacks and browns (she needs to let the investigations run there course before touting that inflammatory statement; proving that the Mayor of Brooklyn Center is divorced from reality saying guns are not needed for traffic stops, a police office in a routine traffic stop of a pickup truck in San Antonio, having a “casual conversation” with the 3 occupants was shot by the driver without warning in his hand but managed to engage in a massive shootout with the occupants fortunately leaving the driver and male passenger dead and the female passenger with a chest wound; The Minneapolis City Council passed a non-binding resolution 11-1  banning police from using tear gas and rubber bullets in riot crowd control; demonstrators outrage over recent police shootings set fires outside the Durham, North Carolina police Headquarters and smashed windows of local businesses.
Apple, Microsoft, Twitter, Amazon and other Big Tech companies seduced by the left’s false claim that the Georgia voting law reform was a voter suppression bill which it is not were falling over each other slamming the bill yet totally silent on the Blues’ plan to pack SCOTUS with 13 judges, destroying judicial independence; Where’s Waldo Harris has now gone 24 days without a press conference on immigration and the border crisis; Prince Phillip’s state funeral limited to 30 guests due to the coronavirus pandemic affecting England will be held at Windsor Castle this Saturday with royal members not wearing military uniforms to prevent Harry from embarrassment; the Utah Jazz should be complimented for providing a scholarship for an in state student in Utah each time they win but should be soundly condemned for limiting the scholarships only to those students not white (in our race card identity politics world, the Red Governor of Utah supported the ban of white recipients).
Backers of a recall effort for L.A. DA Gascon have formally started the process and have started the 160 day clock to obtain 580,000 signatures of registered voters to place a recall on the ballot https://recallgeorgegascon.com/; as Harris seems more and more behind the scenes to be the real president influencing Biden, leave it to the political cartoonist to point out China’s pulling of strings: 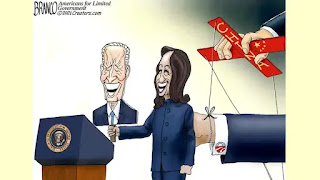 Chicago Gun Violence: HeyJackass.com is now back to show that through April 15, 2021, gun violence involving mostly persons of color shooting persons of color in Chicago is alive and well with 913 persons shot of whom 165 have died.
As always, I hope you enjoy today’s holidays and observances, factoids of interest for this day in history, a musical link to “Aquarius/Let the Sun Shine In” by The Fifth Dimension, that you can click channels and miss the rectalgia that listening to the MSM too often brings and a quote by Col.Tom Colditz on the Texas City Disaster, secure in the knowledge that if you want to send a gift for any memorable events like Mother’s Day, college graduations, birthdays, weddings, or anniversaries, you know that the Alaskanpoet can provide you with a unique customized poem at a great price tailored to the event and the recipient. Please contact me for the  Details on the pricing.
1. Four Square Day—created in March of 2009 by Nathan Bonilla-Warford, an optometrist and social media fan from Tampa with April 16, 2010 (4/4 squared) the first day celebrated; Four Square is a smart phone location-based app and networking social servicing facilitating businesses and patrons to connect with each other. It is perhaps the first social media holiday.
2. National Healthcare Decisions Day—created by Nathan Kottkamp, a healthcare lawyer in Virginia to with free information assist people to make intelligent decisions about their healthcare.
3. 1969 Number One Song—the number 1 song in 1969 on this day with a run of 6 weeks in that position was “Aquarius/Let the Sun Shine In” by The Fifth Dimension to share number 1 status with 17 other songs that year and 1 other acts that had their first number 1 song. Here is a recording by The Fifth Dimension performing “Aquarius”/ “Let the Sun Shine In”: https://www.youtube.com/watch?v=oPK7ZF6jfJE  The Fifth Dimensions, formed in 1965 as The Versatiles changed their name in 1966 to the Fifth Dimension and went on to have 19 hits on the Top 40 List from 1967 to 1973; in 1975 McCoo and Davis and who have been married over 50 years left the group which continued to perform with different members and still is performing today with LaRue as the only member of the original group still performing.
4. Word of the Day—today’s word of the day is “rectalgia” which means medically a pain in the rectum which would be better used to describe what the inane rants of the Squad feel like.
5.  Comets Bring Fame—celebrating the birth on this day in 1926 of Rudy Pompilli, a star tenor saxophonist with Bill Haley and the Comets who never smoked but was diagnosed after a 1974 tour of Europe of lung cancer which many believed was from second hand smoke; he continued playing and touring with Haley and the Comets for all of 1975, recorded his first solo album and played his sax at Philadelphia night clubs to finally play his last note on February 5, 1976 at age 51.
On this day in:

a. 1947 a fire broke out at 8:00 a.m. in the cargo hold on the SS Grandcamp which was docked in Texas City, Texas and was loaded with ammonium nitrate; firefighters were unable to put out the fire and at 9:12 the ammonium nitrate exploded causing massive destruction to the harbor and other ships including the SS High Flyer which also caught fire and sadly was also loaded with ammonium nitrate which exploded causing more deaths and destruction validating the wisdom of the Port of Houston which had banned it because it was  carrying ammonium nitrate from entering. In all almost 600 people were killed including all but 1 of the entire Texas City Fire Department, making it the worst industrial accident in U.S. History.

b. 1947 Bernard Baruch uses the term “Cold War” to describe the conflict between the U.S. and the Soviet Union.
c. 1990 Doctor Jack Kevorkian, known as “Doctor Death”, performed his first of many assisted suicides.
d. 2012 the trial of Anders Breivik, a terrorist charged with killing 8 people with a bomb in Oslo then going to a Workers Youth League summer camp and shooting 69 participants there to death, began which led to a conviction and a 21 year prison sentence, the maximum permitted under Norwegian law.
e. 2012 for the first time since 1977 no Pulitzer Prize for fiction was named.                    Reflections on the Texas City Disaster fire and recovery: “2,500 people were homeless or jobless, 844 people suddenly became dependents, 539 houses were condemned, 600 cars and trucks were demolished and 500 more damaged, 362 freight cars were damaged to some extent and three locomotives were a total loss. ... Yet on May 1, 1947, before all the dead had been buried or all the rubble cleared, a tanker slid into the loading facilities at the south end of the harbor. Texas City was back to work.” Ron Stone Disaster at Texas City.
Please enjoy the poems on events of interest on my twitter   account below (if you like them, retweet, and follow me) and follow my blogs. Always good, incisive and entertaining poems on my blogs—click on the links below. Go to www.alaskanpoet.blogspot.com for Ridley’s Believe It Or Not—This Day in History,  poems to inspire, touch, emote, elate and enjoy and poems on breaking news items of importance or go to  Ridley's Believe It Or Not for just This Day in History.

© April 16, 2021 Michael P. Ridley aka The Alaskanpoet
Alaskanpoet for Hire, Poems to Admire
Poet Extraordinaire, Beyond Compare
A Unique Gift, All Recipients to Receive a Lasting Gift

Posted by Michael P. Ridley aka the Alaskanpoet at 3:16 PM